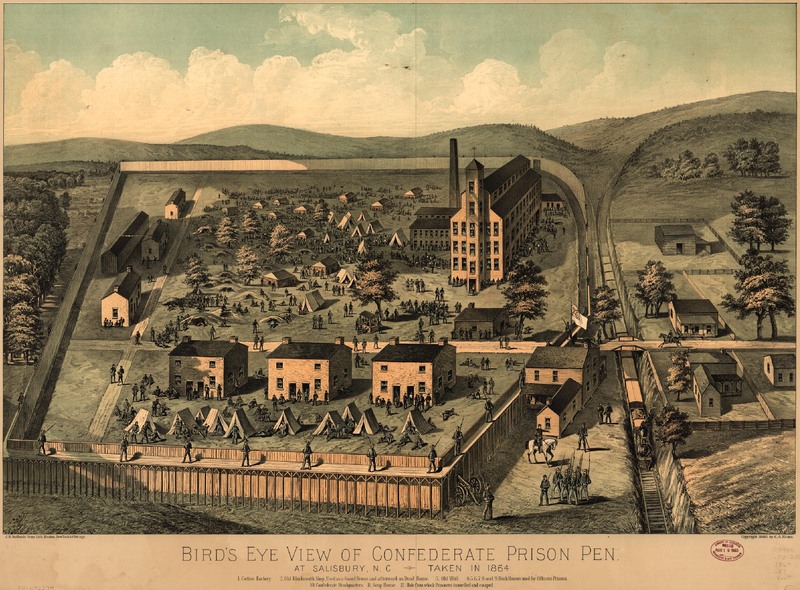 Salisbury prison was built out of an old cotton factory, a hospital and several sheds to create a space to house Confederate deserteres and Union POWs. Originally intended to house between 1,000 and 2,500 people in 1864 the site was overwhelmed with more than 10,000 prisoners of war.

Salisbury prison was one of the largest Confederate prisons and had among the highest percentage death toll on either side. The Civil War prison system was among the most brutal aspects of the American conflict. The death toll at Salisbury was originally estimated at over 11,000; this horrific statistic, the second highest throughout the prison system, helped shape Union memory and national reunion after the war.[1] The National Cemetery built in Salisbury in the postwar years was symbolic of Union victory over the Confederacy. Obelisks and monuments dominated the cemetery in its earliest years. The Salisbury National Cemetery is more than just a memorial; the national site was a sectional tool. Dead soldiers were the most political objects after the war; the United States used Salisbury as a triumph and symbol of Confederate war guilt. Throughout Reconstruction, the victorious North forced the Confederacy in places like Salisbury—through former prison memoirs, memorials and post-war prison trials—to accept the blame for the horrendous prison system. By the turn of the century, shared events like the Spanish American War and the World Wars along with a growing reconciliation transformed the purpose of Salisbury National Cemetery. Later memorials honored dead prisoners without defaming the former Confederacy. Fallen veterans of the Spanish American War and the World Wars came from across the country and were laid to rest in Salisbury, symbolizing and creating an end to War Guilt and Triumphalism.