This political cartoon by Norman Ethre Jennett appeared in the Democratic Raleigh News and Observer. It depicts four caricatured African Americans (marked “DEAD NEGRO,” “EIGHTEEN YEARS OLD,” “IMPORTED,” and “CONVICT”) who are prevented from casting their ballots by a wall labeled “NEW ELECTION LAW.” The cartoon was likely designed to respond to Republican and Populist protests to the election laws passed by the democratically-controlled North Carolina legislature in 1899. These laws, among other things, allowed for the appointment of partisan registrars with nearly unlimited power in determining who could register to vote. While Fusionist leaders claimed these regulations were unconstitutional and would lead to qualified voters being denied the right to vote, this cartoon suggested that the true motivation for the opposition to these laws was the fact that it would prevent the radicals from committing/benefitting from electoral fraud.

WHY THE RADICALS ARE MAD

The Members of Their Party That Will Not Be Able to Vote Under the New Election Law. 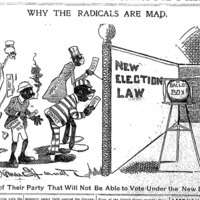