The Home Guard murdered Allen and William Lowry in Robeson County on March 3, 1865.

On March 3rd 1865, bands of the Home Guard, under orders of Robert McKenzie, the leader of the Home Guard in the region, collected several members of the Lowry family to his plantation after several animals from his plantation were stolen. Suspecting the Lowry family for these activities, as well as helping hid other Lumbees from impressed service, stockpiling illegal weapons, aiding Union soldiers back to the North, as well as other activities seen as illegal and treasonous to the Confederate cause. McKenzie interrogated the several members of the family, threatening them with torture and even death to gain the information he ‘needed’ to hear. William made a desperate attempt to escape from the situation, but was caught by the guard shortly after. The Guard decided a more drastic measure was needed to gain some progress with the family. The guard took William and his elderly father Allen, forced them to dig their own graves, and then shot of them dead, giving them a burial in name only. Three days later, members of the Lowry family would return to the site of the murder and give the two men a proper burial that they were initially denied. Legend has it that Henry Berry Lowry, who was a fugitive of the same Home Guards who shot his father and older brother, was watching helplessly from the bushes as the murders took place. What’s more important to this event is that this is the culminating event that pushed Henry Berry Lowry to pursue the path of the criminal as he himself began a hunt for vengeance against the men who had committed this crime to his family. (Evans 1995, 7-18) 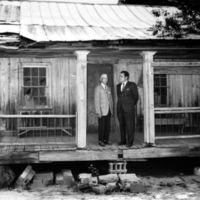