This editorial published in the highly conservative Democratic North Carolina Standard, edited by William Woods Holden, one of the North Carolina’s leading pro-slavery and secession-sympathetic citizens, criticized the notion that Republican, anti-slavery presidential candidate John C. Fremont would be added to the state’s 1856 electoral ticket. The author of the article claimed that the election of Fremont would inevitably lead to the separation of northern and southern states. He goes on to say, “no true or decent Southern man would accept office under him; and our people would never submit to have their postoffices, customs houses and the like, filled with Fremont’s Yankee abolitionists.” The editorial finished with a threat to all black Republicans residing in the state, especially directed at any such supporters instructing the state’s young men. These men either needed to “be silenced or leave. The expression of black Republican opinions in our midst, is incompatible with our honor and safety as people.”

Can it be possible that there are men in the South who prefer Fremont for the Presidency, or who would acquiesce in his election? The New York Herald boasts
that there are already Electoral tickets in Virginia, Kentucky, and Maryland; and it adds, "Texas and North Carolina will probably soon follow suit." This is a vile slander on the Southern people. No Fremont Electoral ticket can be formed in North Carolina--mark that! It may be that there are traitors here and there, in this State, as there were tories in the Revolution, who would thus deliver up their native land to the fury of the fanatic and the torch of the incendiary; but they are few and far between. They do not number more than one in one hundred.

The election of Fremont would inevitably lead to a separation of the States. Even if no overt or direct act of dissolution should take place, he could not carry on the government in the South. No true or decent Southern man would accept office under him; and our people would never submit to have their postoffices, custom houses and the like, filled with Fremont's Yankee
abolitionists. We would not expect nor ask the Northern people to submit in a similar case--and we will not submit. Suppose, for example, the Southern people,
having the power to elect a President, should nominate a candidate on sectional grounds, pledge to wield all the powers of the federal government to extend and
propagate domestic slavery and pledge to measures of gross aggression, without regard to the Constitution, or the rights and property of the Northern people;
and suppose they should elect such a candidate--what would the North do? They would resist it, and they ought to resist it. They would regard it as a vital
dissolution of the Union, and would act accordingly. The Union can neither be administered nor can it exist on sectional grounds.

If there be Fremont men among us, let them be silenced or required to leave. The expression of black Republican opinions in our midst, is incompatible with our honor and safety as a people. If at all necessary, we shall refer to this matter again. Let our schools and seminaries of learning be scrutinized; and if black Republicans be found in them, let them be driven out. That man is neither a fit nor a safe instructor of our young men, who even inclines to Fremont and black Republicanism. 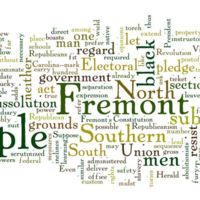