This broadside, or poster, addressed to African Americans in North Carolina at the time of the impeachment of Governor William Woods Holden asked them to pray because their only protector, Governor Holden, can no longer do that and they are inevitably going to face serious struggles.

To the colored people throughout the State:

â€¦The poor people, especially the colored people are the great body of victims appointed for the slaughter, and we as Representatives, ocupying [sic] the place of power, as did Esther, feel it to be our duty to warn you of the impending danger, and arouse you to such action as may tend to avert, if possible, the threatened evil.

The only offence of Gov. Holden, and that which has brought down the wrath of the dominant party upon him is that he thwarted the designs of a band of Assassins, who had prepared to saturate this State in the blood of the poor people on the night before the last election on account of their political sentiments, and to prevent them from voting. Because he dispersed this murderous host, organized by the so called Conservative party they propose to destroy him. First they propose to suspend him, then to go through with a mock trial before the Senate as they have already done before the House, where a true bill has been found without taking testimony.

We therefore propose a day of fasting and prayer throughout the State. Let us ask God to bring our good friend the governor triumphantly through this ordeal, and to avert the evils that are hanging over us.â€¦ 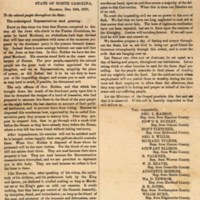