As the course I have taken in publishing the letter which appeared in the Standard of the 4th inst. may appear to some, extraordinary, I hope a simple statement of the reasons which have induced me to take this step will be kindly received.

At the state election in August I went to the polls to give my vote. One of the students (Mr Cozart ) was in the window at which the votes were taken, and over-looked my vote as I handed it in. Seeing it to agree with his own opinions in Politics (Democratic) he remarked "that is all right." While leaving the place of voting I was met by several students, who began to question me as to how I had voted, how I should vote for President, &c. I told them that I did not know that I should vote for President at all. One asked whether if there were a Fremont ticket I would support it. I said I would. Another (Mr Mullins ) asked whether in case the South were attacked by North I would support the North. I said, no, I am of the South & for the South, that against any force from without the South would be a unite. About this time a returned Mexican volunteer came up, (he had been drinking evidently) and began to talk pretty loud. He said that if the rich folks got into a war about the negros they might fight it out themselves. That when he volunteered to go to Mexico, a good many rich men put their names down, and then took them off as soon as the company was made up.

I replied that such might have been the case in some instances, but that I thought all classes did their part well in Mexico. I mention these circumstances because a report was put in circulation here a few days afterwards, that I had advocated abolition doctrines, that I had made a speech to the poorer classes of citizens to enflame them against the rich, &c. As soon as I heard of this report I traced it out as well as I could, and had it contradicted. Gov. Manly seems to have heard something of the kind, and perhaps others in Raleigh. Dr Jones said that he would write to Gov. M. about it, & I asked him to say, that if his (Dr J's ) statement were not sufficient I would write Gov. M. a letter which he might use as he thought proper. After this the whole subject seemed to have been forgotten, until about three weeks ago when the Standard's first editorial on the subject appeared, and even that was little noticed, although I heard a student remark that it was directed at me. I had supposed it would go no farther, until, a week ago, the article signed "an Alumnus" appeared. From the spirit manifested in that article I thought the Standard was bent on agitation, and as rumor would be busy with her thousand tongues, it would be better, and more honest to come out openly and avow my sentiments. That would at least prevent misrepresentation, and as I gave the reasons for my opinions, the reading public would easily judge of thier soundness.

I have not at any time endeavored to make converts to my doctrines among the students. Soon after the election I spoke to two of them (Mr Cozart & Mr Mullins ) but only in answer to the question how as a Southerner I could oppose the extension of slavery into Kansas. There has been no excitement in College in relation to this matter until last Saturday night, and that was confined to a small part of the students. For about an hour and a half there were a good many students in the campus, but soon after eleven oclock they dispersed without any interference on the part of the faculty. From various circumstances it is suspected that the preparations for this "spontaneous" demonstration were sent up from Raleigh.

The opinion most current here is that the writer of the article signed "an Alumnus" is Mr Engelhardt of Raleigh. But I have no certain knowledge that he was the writer. At present the usual quiet prevails in College. In fact only a small part of the students have seen my article as there are but a few copies of the semi-weekly Standard taken here.

I have no means of knowing in what light this matter will be viewed by the Trustees. But as it is an important one, to me at least, I hope they will give it a careful consideration before coming to a decision. I cannot see that my letter to the Standard involves in any way the opinions of other members of the Faculty, at least it should not.

His Excellency Thomas Bragg
Gov. of State of North Carolina &
President of the Board of Trustees of the University
Raleigh, N.C. 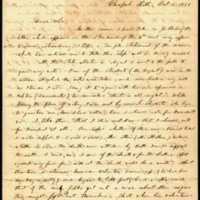 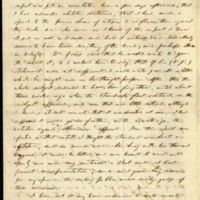 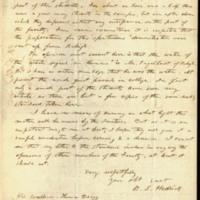