"Letter from Charles Manly to David L. Swain," Benjamin Sherwood Hedrick's Views on Slavery and Dismissal from the University, Documenting the American South, The University Library, The University of North Carolina at Chapel Hill, http://www.docsouth.unc.edu/unc/unc08-22/unc08-22.html (accesssed on February 13, 2012).

I send you herewith a copy of minutes of Ex. Com. of this day.
On the trial ofthe mpeachment, after all the Communications from the Faculty were read Gov. Bragg presented 4 papers of 30 mortal pages from "Sir Wm Hamilton" called his "Postscript to Memorial No 1; Key & to Memorial No. 2 & Postscript to his Key & Appendix." No one called for the reading of these papers & they were not read. Gov B. & Mr Bryan stated that they had recd private letters from the Prosecutor which were not exhibited. I have no doubt that other members (Moore & Saunders) had also recd some, but they did not say so.
I made the Comm a speech, me judice, a rouser & introduced 4 Resolutions.
1. That the case of Whitaker was, by law, exclusively within the cognizance & jurisdiction of the Faculty, that we had confidence in their judgt & discretion & declined expression of any opinion on merits (in substance).
2. Condemning the interference of Herrisse in the appointment of Tutors & opposition to Prest & affirming & approving Faculty's [Resolution] of 15 Augt. last (following copy).
3. Approving of discipline &c & that there was nothing in "Sir Wm's" complaint.
4. Therefore that the further consideration of the subject be indefinitely postponed.
Moore said we had not time to consider the subject, that he had to fix his papers for his Circuit &c. Saunders also was "taken with a leaving" to attend a Rail Road meeting. The illegible moved that the whole be ref.d to a select Comm consisting of Moore, Bryan, & mysely to make report &c This motion was seconded by Bryan & carried.
Should this Committee neverreport & the subject remain on the table, the necessary inference will be that the grave impeachments of the Prosecutor have been regarded as senseless clamor & unworthy of notice. But more of all this anon.
After taking a sober second thought of this whole affair I am inclined to believe that you are magnifying it too much, giving too much importance to scandal. All Sir Wm wants is to provoke & goad you all. His private griefs & malice will not be heeded by a single member of the Board of Trustees. I will not repeat (with Young) that it is:

"Old Ocean into tempest wrought
To waft a feather or to drown a fly."

But I will say (with one illustrious predecessor Old Stoky) that it is firing a cannon at a small cock sparrow.
As to Hedrick, he is beheaded. I read your letter to the Comm on their power to dismiss. But to no purpose. The "out side pressure" was too great. Sundry letters had come up from Trustees (from Col Steele among others) a public meeting (I think in Murfreesboro) & the Southern press all demanding his instant                        removal, the Committee determined to take the responsibility. Saunders's Reson was a long & violent one, mixed up with politics; we finally got it down to what it is. Moreover it was stated that certain students who were here during the fair declared that the danger of a College riot was imminent; that they were only waiting to see what the Ex. Comm would do & if they passed it over that violence & bloodshed would ensue. I placed very little confidence myself in this story.
Please notify Mr Hedrick of the decision.
Finding that the young McKimmons are here I will send up by them the "Key & Appendix & Postscript" as I could not afford to pay postage on it, & after you have amused yourself with it you can return it by a private opportunity.
It is my purpose, at present, to call by CHill on my return from Chatham Count . It will be a favorable time to pay off the balance of salaries &c. Should I do so I shall drive straight up to your House. I can't stand Guthrie's & I know you will be glad to see me "any how" I will let you know whether I go or not.
Mr Amis of Granville has I think made a pretty plain case against the Anthropophagos about Jacob Fane.

C. Hill
Copy
"RaleighOct. 18, 1856
Executive Committee met.
Present
His. Excy Gov. Bragg, Prest
John H. Bryan, Daniel W. Courts, Charles L. Hinton, Charles Manly, Bat. F. Moore, R. M. Saunders
The Committee resumed the consideration of the  several memorials of Mr Herrisse heretofore laid on the table.
Copies from the Faculty's Journal together with the answering & statements of the President & several of the Professors as to the  charges contained in the said memorials were laid before the Committee & read: and Gov. Bragg also presented other papers from Mr Herrisse called by him "A Postscript to Memorial No. 1, Key & Appendix to Memorial No. 2, & a Postscript to Key & Appendix."
On motion of Judge Saunders
Ordered that the whole subject be referred to a select Committee consisting of Messr Moore Bryan & Manly to make report.
Judge Saunders presented the following Resolutions which were read adopted.

Whereas Profr B.S. Hedrick seems disposed to respect neither the opinion of the Faculty nor the Trustees of the University but persists in retaining his distinction to the manifest injury of the University:
Resolved that for the causes set forth by this Committee on the 11th inst., he the said B. S. Hedrick be & he is hereby dismissed as a Professor in the University; & the Professorship which he now fills is hereby declared to be vacant.
Resolved that he be paid his full salary to the close of the present session.
Resolved that the Secretary notify him of this decision.

The resignations of A. G. Brown as Adjunct Profr of Latin & Greek, & of Wm R. Wetmore as Tutor from & after the present session were read & accepted.
The Report of Jas. S. Amis Esq of Granville Co on the escheat case of Jacob Fane made at the request of the Bd of Trustees in June last was presented & read & laid on the table. 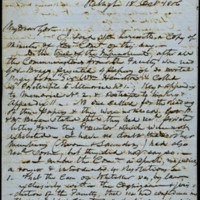 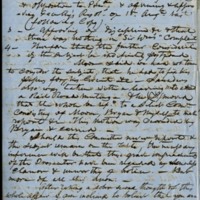 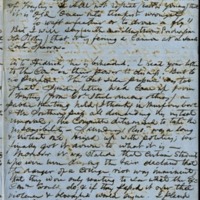 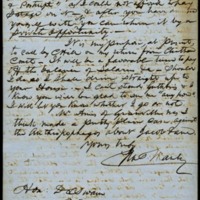 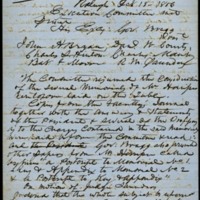 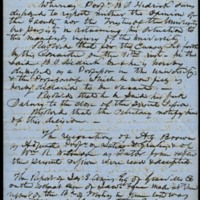