Argument in the impeachment trial of W.W. Holden, governor of North Carolina, 1871

Argument in the impeachment trial of W.W. Holden, governor of North Carolina, 1871

And this brings us to a brief statement of the nature and character of the offences preferred in the articles of impeachment against the accused.
Article I, charges, substantially, that the accused corruptly and wickedly declared the county of Alamance to be in " insurrection," whereas there was no insurrection; that he took military possession of the county by armed bands of lawless and desperate men, organized without lawful authority; and

pg 112
Article VIII charges, that the accused as govornor [sic.], made his warrants for large sums of money on the public treasurer fur the unlawful purpose of paying the armed men before mentioned â€”caused and procured said treasurer to deliver to one A. D. Jenkins, appointed by the accused to be paymaster, the sum of forty thousand dollars; that the Hon. Anderson Mitchell, one of the superior court judges, on application to him made, issued writs of injunction which were served upon the said treasurer and paymaster, restraining them from paying said money to the said troops ; that thereupon the accused incited and procured the said A. D. Jenkins, paymaster, to disobey the injunction of the court and to deliver the money to another agent of the accused, to-wit: one John B. Neathery; and thereupon the accused ordered and caused the said John B. Neathery to disburse and pay out the money so delivered to him, for the illegal purpose of paying the expenses of, and keeping on foot the illegal military force aforesaid. 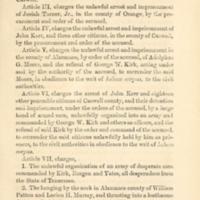 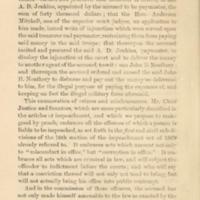