I stopped last night at the pleasantest house I have yet seen in the mountain; a framed house, painted white, with a log kitchen attached. The owner was a man of superior standing. I judged from the public documents and law books on his table, that he had either been in the Legislature of the State, or that he was a justice of the peace. There were also a good many other books and newspapers, chiefly of a religious character. He used, however, some singularly uncouth phrases common here. He had a store, and carried on farming and stock raising. After a conversation about his agriculture, I remarked that there were but few slaves in this part of the country. He wished that there were fewer. They were not profitable property here, I presumed. They were not, he said, except to raise for sale; but there were a good many people here who would not have them if they were profitable, and yet who were abundantly able to buy them. They were horrid things, he thought; he would not take one to keep it if it should be given to him. â€˜Twould be a great deal better for the country, he believed, if there was not a slave in it. He supposed it would not be right to take them away from those who had acquired property in them, without any remuneration, but he wished they could all be sent out of the country â€” sent to Liberia. That was what ought to be done with them. I said it was evident that where there were no slaves, other things being equal, there was greater prosperity than where slavery supplied the labor. He didnâ€™t care so much for that, he said; there was a greater objection to slavery than that, in his mind. He was afraid that there was many a man who had gone to the bad world, who wouldnâ€™t have gone there if he hadnâ€™t had any slaves. He had been down in the nigger counties a good deal, and he had seen how it worked on the white people. It made the rich people, who owned the niggers, passionate, and proud and ugly, and it made the poor people mean. â€œPeople that own niggers are always mad with them about something; half their time is spent swearing and yelling at them.â€

â€œAnd what do you think of it?â€

â€œDo most of the people here in the mountains think as you do about slavery?â€

â€œWell, thereâ€™s some thinks one way and some another, but thereâ€™s hardly any one here that donâ€™t think slaveryâ€™s a curse to our country, or who wouldnâ€™t be glad to be rid of it.â€

I asked what the people about here thought of the Nebraska Bill. He couldnâ€™t say what the majority thought. Would people moving from here to Nebraska now, be likely to vote for the admission of slavery there? He thought not; â€œmost people would much rather live in a free State.â€ He told me that he knew personally several persons who had gone to California, and taken slaves with them, who had not been able to bring them back. There were one or two cases where the negroes had been induced to return, and these instances had been made much of in the papers, as evidence that the slaves were contented.

â€œThatâ€™s a great lie,â€ he said; â€œthey are not content, and nine tenths of â€˜em would do â€˜most anything to be free. Itâ€™s only now and then that slaves, who are treated unusual kind, and made a great deal of, will choose to remain in slavery if freedom is put in their way.â€ He knew one man (giving his name), who tried to bring two slaves back from California, and had got started with them when some white people suspecting it, went on board the ship and told him it was against the law to hold negroes as slaves in California, and his negroes shouldnâ€™t go back with him unless they were willing to. Then they went to the slaves and told them that they need not return, if they preferred to stay, and the slaves said they had wanted very much to go back to North Carolina, yet they would rather remain in California, if they could be free, and so they took them ashore. He had heard the slave owner himself relating this and cursing the man who interfered. He had told him that they did no more than Christians were obliged to do.

I overtook upon the road, to-day, three young men of the poorest class. Speaking of the price of land and the profit of farming, one of them said, believing me to be a southerner,

â€œWe are all poor folks here; donâ€™t hardly make enough to keep us in liquor. Anybody can raise as much corn and hogs on the mountains as heâ€™ll want to live on, but there ainâ€™t no rich people here. Nobodyâ€™s got any black ones â€” only three or four; no oneâ€™s got fifty or a hundred, like as they have down in the East.â€ â€œIt would be better,â€ interrupted another, somewhat fiercely, â€œthere warnâ€™t any at all; thatâ€™s my mind about it; theyâ€™re no business here; they ought to be in their own country and take care of themselves, thatâ€™s what I believe, and I donâ€™t care who hears it.â€ But let the reader not be deceived by these expressions; they indicate simply the weakness and cowardice of the class represented by these men. It is not slavery they detest; it is simply the negro competition, and the monopoly of the opportunities to make money by negro owners, which they feel and but dimly comprehend. 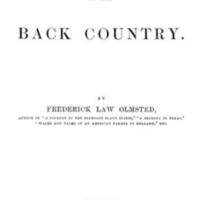