The Raleigh Standard, was a newspaper based out of Wake County. In this article it is denouncing the need or want of North Carolinian's to secede form the Union. It sights that if North Carolina wanted to break form the Union it would have, and that there is no cause for NC to leave. it further denounces some of the other States that have already left, citing its not their right to do so. this is a reflection of what many are feeling about secession in North Carolina.

North Carolina and Secession—North Carolina will not secede from the Union for existing causes. Nearly all the Union candidates in this State advocated a Convention; if they had opposed it, it would have been voted down by 30,000 majority. We state this as one of the strongest evidences that the State is not disposed at this time to secede. It will not do to say that the people of North Carolina are submissionists. They are just as brave as other people, and because they are, they are not ready to fight shadows. North Carolina is still the equal, and proudly the equal of the most powerful States in the Union. Florida, with a white population not larger than Chicago, would also have been the equal of New York, if when had remained in the Union. But, say the disunionsits, the Southern States are not equals of the Northern States in the common territories. We deny it. The territories of Colorado, Nevada, and Dakotah were organized by the last congress—the republicans being the majority—without the Wilmot Proviso. As Mr. Douglas observed in the senate, Mr. Wilmot arrived and took his seat as a Senator form Pennsylvania only to find that his own Party had repudiated his Proviso. All the territory we have has been disposed of – there is not more to be organized. New Mexico, a part of which lies north of the old Missouri line, protects slavery by as stringent a slave code as that of Mississippi. The Dred Scott decision exists and applies to all these territories. What then? Why the southern States are the equals of the Northern in the common territories. So far, then as the territories are concerned there is no cause for secessions. But in addition to this several of the free states have already repealed their personal liberty bills; and the last Republican Congress passed by a two-thirds vote a proposed amendment to the Constitution guaranteeing slavery forever in the States. This amendment will no doubt be adopted and become a part of the Constitution. We repeat, North Carolina will not secede. Virginia will not secede. The late action of her Convention shows that she is watching and waiting. She sees no good cause just now to join in the war dance of succession. Our disunion friends may as well hang up their fiddles. The people will keep step to no tune of their playing. Raleigh Standard. 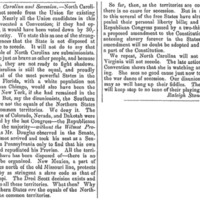