This editorial from the Raleigh News and Observer railed against Fusionist governmental leaders whose advice, it claimed, might provoke a violent response among African Americans. To support is accusations, the article's author cited the actions of well-known Populist Senator Marion Butler and Republican leaders Edmund Spencer Blackburn and Lieutenant Governor Charles A. Reynolds as well as those of Wake County Resident Haywood H. Knight, who reportedly said that “the negroes and republicans would have to ‘STAND OVER THE BALLOT BOXES AND WHALE THE REGISTRARS AND POLL HOLDERS OVER THEIR HEADS WITH STICKS’ in order to get the correct count at the election.” According to the article’s author, if African Americans “inflamed by political prejudice and mean whiskey” were to react violently than Knight would be at fault due to his statements. The final paragraph of the article called for whites to stop using such incendiary language with regards to the election, claiming that the vote will be fair and that nothing will stop whites from passing the amendment to end African American suffrage

"Whom the Gods would destroy they first make mad."

From the incendiary utterance of Butler before the Populist State committee and the threat of assassination voiced by Blackburn at Newton, down to the attempt by Lt. Gov. Reynolds, to scare registrars by the silly threat of Federal marshals, the Fusion orators seem to talk and act like a set of cut-throats and bloody handed butchers. We know very well that if any fighting is to be done these bad men who give this bloody advice will be far from the firing line, but their advice is liable to precipitate trouble. Most of the negroes are peacable, but when bad negroes get full of whiskey they are liable to put into practise the incendiary threats which their leaders make in their public addresses and private talks.

We publish elsewhere a statement made by Haywood H. Knight of Wake county, which is in line with the dangerous utterances of Butler, Blackburn and others. A gentleman of character swears that Mr. Knight said that negroes and Republicans would have to "STAND OVER THE BALLOT BOXES AND WHALE THE REGISTRARS AND POLL HOLDERS OVER THEIR HEADS WITH STICKS" in order to get the correct count at the election. Mr Knight would be in a sense morally responsible if the negroes of St. Matthews, misled by his statements, should "whale the registrars over their heads with sticks," and in his calmer moments would regret having suggested such lawlessness and ruffianism to ignorant negores. If Mr. Knight can talk that way, may we not expect negroes, inflamed by political prejudice and mean whiskey to do acts of violence? 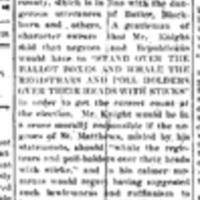