In this article the reader is presented with the supposed first hand account of one George Abbot, who despite being hunted down by the Ku Klux Klan and forcibly removed from the town of Weldon, had a personal hatred of the Lowry gang, and with their leader Henry Berry, due to previous â€œshooting matchesâ€ that occurred between the two, and for Henry Berry asking to borrow ten dollars from Mr. Abbot. Abbot at the time that the article was being written, was enlisting men to hunt down the outlaw and his gang and to hopefully win the reward money being offered by the governor. 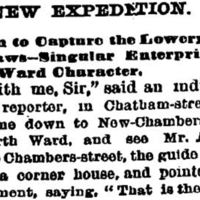