Political cartoonist Norman Jennett crafted this cartoon for the May 24, 1900 issue of the Raleigh News and Observer. The cartoon depicted a large, well-dressed African-American man flanked by two smaller white men labeled Butler and Pritchard, prominent leaders of the Populist and Republic Parties respectively. The implication of this cartoon is that the Populists and Republicans Parties (or collectively the Fusionist parties) had once again allied themselves with African American voters in an effort to drive out the Democratic Party (and by extension the white man’s government), just as they had during the 1894 and 1896 elections. The increased size of the African American figure and the diminished size and stance of the white politicians further suggested that the white men were not the dominant figures in the alliance but, instead, were dominated by the interests of African Americans. The cartoon, thus, provided a visual representation of the kind of “negro domination” that Democrats claimed resulted from allowing African Americans to vote.

These Three Have Met Again 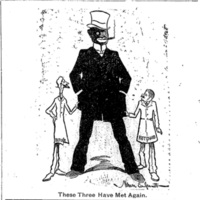