During the 1898 White Supremacy Campaign, Democrats targeted white fusionists as much as African Americans. White Populists, they claimed, joined with the Republican Party in the mid 1890s looking for handouts. Governor Daniel Russell, a former Greenback Party member, was elected Governor on the fusion ticket of 1896. The cartoon depicts Governor Russell in the hands of his African American electorate, demonstrating that even fusionism was a type of "negro domination" to the Democrats.

"I Make Them Dance Or I Crush Them" 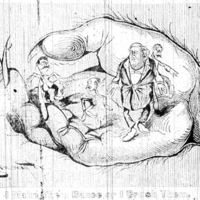