On February 15, 1869, William E. Anderson, already a successful bank officer at the age of 33, was able to secure a spot on pew nineteen in the Episcopal congregation of Christ Church in Raleigh. Although today this practice strikes us as elitist, â€œpew renting,â€ first emerging in the late 18th century, was by no means uncommon in Episcopalian and Presbyterian congregations in North Carolina. Depending on the desirability of the pew, church members paid to reserve a specific location in the sanctuary for worship activities. Those pews that provided the best visibility for observers (most often center pews near the front of the nave) required the largest financial donations. With no financial support from the American government, pew rentals developed as an attractive a source of income for churches. However, by the time William Anderson purchased the rights to pew nineteen in 1869, the practice had become quite controversial. While rentals remained an effective means for meeting church expenses, they privileged populations with larger amounts of disposable income. Those who were unable to afford a rental were obligated to participate from the side and rear pews, or even second level galleries. In 1874, the issue had become so divisive in Christ Church that it resulted in the formation of an entirely new congregation, the Church of the Good Shepherd, known as the first â€œfreeâ€ Episcopal church in Raleigh. Christ Church continued to sell pew rentals until the 1890s. In analyzing William Andersonâ€™s 1869 pew rental, I find myself considering a number of questions. What determined Williamâ€™s placement on pew nineteen? The amount of payment? Availability? Furthermore, what relationship did he possess to the church members in front of him? What of the dozens of nameless individuals behind him? For all of the questions that remain unanswered, this unique document nonetheless spurs me to consider the foundations and nature of social privilege today and my role as a museum professional. What groups remain on the back pews of society? More importantly, what can I do as a public historian to facilitate conversations that might bring them forward?

The undersigned, living the being the Vestry and Trustees of Christ Church, in the City of Raleigh, duly appointed by the congregation thereof, do hereby certify and make known that William E. Anderson is entitled to that certain pew in the said Church numbered on the plan thereof nineteen to have and use the sittings in the said pew on all occasions of public worship.  This title to descend upon his heirs, being members of the said congregation, or of the Protestant Episcopal Church, or to vest in any other person to whom, with the assent of the Vestry and Trustees for the time being, he may devise or assign the same, so long as the present church edifice shall endure; and the party on or to whom the same may descend, be devised or assigned, shall, upon the surrender of this certificate, receive another in like form to himself or herself.

In witness whereof, the said Vestry and Trustees have hereto subscribed their names the 15th day of February, 1869. 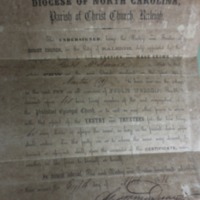