Remarks given by the Southern Claims Commissioner in response to the disallowed claim of Austin and William Bryan. These men were ex-slaves, and their claim was disallowed for failure to prove ownership of the property for which they were requesting reimbursement.

1. Items 1. We can not allow for tobacco.
2. It is rather remarkable that the slaves should have $50 in gold & silver- a gold watch and five broadcloth wearing apparel. It looks like a fraud. Especially when the master testifies, uses language in a way that can be interpreted to mean that they owned the property & yet seems carefully to avoid a direct statement that they did own this property-

It is also obvious that the taking was mere pillage and lawless predation. 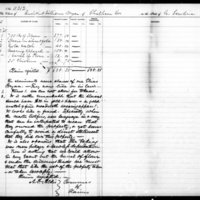