The third chapter of Walter Hilderman's They Went Into The Fight Cheering is particularly useful in describing how the Confederate conscription service was organized in the early years of the war. It begins by describing the desperation of the Confederate government when they realized, even after early victories, that the war would be far from short in its duration in late 1861, and that a great deal more men would be needed to fight against the growing Union army. It goes on to describe how this desperation for more troops only intensified as the capitol of the Confederacy, Richmond, lay threatened by General McClellan's Union forces in early 1862. Having considered this, and despite the widespread opposition he knew would follow, Jefferson Davis signed America’s first national compulsory military service law, in April 1862. This eliminated volunteering in the army as an option for Southern men, and instead automatically enlisted every man between the age of eighteen and thirty-five into the Confederate military. Some men could be exempted from duty on religious or medical grounds, however, and those with enough money could pay for another to take their place as a surrogate soldier. By in large though, this meant that a major influx of new, untrained recruits, some of whom adamantly opposed the war effort, would have to be rounded up, trained, assigned, and transported to combat regiments with no time to lose. The chapter goes on to describe how the organization and execution of this task in North Carolina was put into the hands of Captain Peter Mallett, a distinguished business and militiaman. Overall, the remaining portion of the chapter focuses on how Mallett, despite a great number of difficulties, organized two camps for training new soldiers before sending them to Virginia. The chapter seems more important, however, in its description of the resistance to Confederate conscription in North Carolina. Hilderman is sure to mention the fact that on several occasions officers in charge of rounding up men who had failed to answer the call to arms were assaulted and sometimes even killed in the process. The camps Mallett built for training soldiers began to take on more of a prison feel after hundreds of recruits organized an escape late in 1862, and hundreds of armed guards had to be placed along the perimeter of the camps. Entire military campaigns even had to be organized to sweep across counties in search of men who qualified to fight, especially after the qualification age was expanded to include men up to the age of forty-five. Overall, this book, and this chapter in particular, does well in giving an overall look at the conscription process in North Carolina during the Civil War, and, to some degree, the resistance that stood against it.

On April 16, 1862, Jefferson Davis signed America's first national compulsory military service law...The new law prevented the one-year volunteers from leaving the army for two more years and provided for the conscription of additional three-year solders as they were needed. 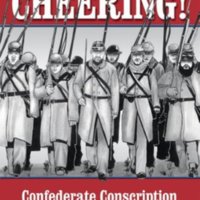