The last page of Calvin Hoggard's claim, this page contains a letter by Mr. Hoggard to the Commission explaining his circumstances. Most interestingly, he claims to have been a Union soldier in the 2nd Regiment, even though claim was disallowed. This was likely due to his claim not having a 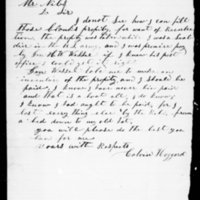