The Richmond Planet, a African American owned, Republican newspaper goes to great length to lay out their argument that the Attorney General John W. Griggs decision that there is no evidence that would warrant any interference by the federal government is incorrect. They lay out examples where the federal government intervened in Illinois. The article also quotes the constitution and how the Attorney General has incorrectly interpreted the Presidents duty to protect citizens rights when the state has failed to do so. 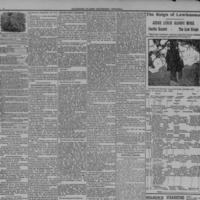