The Raleigh News and Observer, a Democratic newspaper posted an article the laid out the results of a meeting in Wilmington, North Carolina on November 9, 1898 after winning the election held on November 8, 1898. The meeting of the best white citizens passed some resolutions that would end what the paper called Negro Domination. They called for Editor Manly of the Record to be expelled within twenty-four hours with notice of his intent to be returned by prominent African American leaders within twelve hours. They called for the resignation of the Mayor and the Chief of Police.

AND RESIGNATIONS OF MAYOR AND CHIEF OF POLICE DEMANDED.

Time for Negro Domination Forever Past,

Though they are to be Treated With

Wilmington, N. C., Nov. 9.â€”There was a mass meeting of the business men of Wilmington today, attended by fully 800 of the best white citizens, at which the following resolutions were adopted:

â€œBelieving that the constitution of the United States contemplated a Government to be carried on by an enlightened people; believing that its framers did not anticipate the enfranchisement of an ignorant population of African origin, and believing that the men of the State of North Carolina who joined in forming the Union did not contemplate for their descendants a subjection to an inferior race.

â€œWe the undersigned citizens of the city of Wilmington and county of New Hanover, do hereby declare that we will no longer be ruled, and will never again by ruled by men of African origin. This condition we have in part endured because we felt that the consequences of the war of secession were such as to deprive us of the fair consideration of many of our countrymen.

â€œWe believe that, after more than thirty years, that this is no longer the case.

TIME FOR NEGRO RULE PAST.

â€œThe stand we now pledge ourselves to is forced upon us suddenly by a crisis and our eyes are open to the fact that we must act now or leave or descendants to a fate to gloomy to be borne.

â€œWhile we recognize the authority of the United States, and will yield to it if exerted, we would not for a moment believe that it is the purpose of more than sixty millions of our race to subject us permanently to a fate to which no Anglo-Saxon has ever been forced to submit.

â€œWe therefore, believing that we represent unequivocally the sentiment of the white people of this county and city, hereby for ourselves, and representing them, proclaim:

â€œFirstâ€”That the time has passed for the intelligent citizens of this community, owning 95 per cent of the property and paying taxes in the like proportion, to be ruled by negroes.

â€œSecondâ€”That we will not tolerate the action of unscrupuious white men in affiliating with the negroes so that by means of their votes they can dominate the intelligent and thrifty element in the community, thus causing business to staguate and progress to be out of the question.

â€œThirdâ€”That the negro had demonstrated by antagonizing our interest in every way and especially by his ballot, that the is incapable of realizing that his interest are and should be identical with those of the community.

â€œFourthâ€”That the progressive element in any community is the white population and that the giving of nearly all of the employment to negro laborers has been against the best interest of this county and city and is a sufficient reason why the city of Wilmington, with its natural advantages has not become a city of at least , inhabitants.

â€œFifthâ€”That we propose in future to five to white men a large part of the employment heretofore given to negroes because we realize that white families cannot thrive here unless there are more opportunities for employment for the different member of said families.

â€œSixthâ€”That the white men expect to live in this community peaceable, to have and provide absolute protection for their families, who shall be safe from insult from all persons, whomsoever. We are prepared to treat the negroes with justice and consideration in all matters which do not involve sacrifices of the interest of the intelligent and progressive portion of the community. But we are equally prepared now and immediately to enforce what we know to be our rights.

MANLY TO BE EXPELLED.

â€œSeventhâ€”That we have been, in our desire for harmony and peace, blinded both to our best interest and our rights. A climax was reached when the negro paper of the city published an article so vile and slanderous that it would in most communities have resulted in the lynching of the editor. We deprecate lynching and yet there is no punishment, provided by the laws adequate for this offense. We, therefore, owe it to the people of this community and of this city, as a protection against such license in future, that the paper known as the Record cease to be published and that its editor be banished from this community.

â€œWe demand that he leave this city within twenty-four hours after the issuance of this proclamation. Second, that the printing press from which the Record had been issued be packed and shipped from the city without delay, that we be notified within twelve hours of the acceptance, or rejection of this demand.

â€œIf the demand is agreed to, within twelve hours we counsel forbearance on the part of all white men. If the demand is refused or if no answer is given within the time mentioned then the editor, ManlyÂ¸ will be expelled by force.

â€œIt is the sense of this meeting that Mayor S. P. Wright and Chief of Police J. R. Mullen, having demonstrated their utter incapacity to give the city a decent government and keep order therein, their continuance in office being a constant menace to the peace of this community ought forthwith to resign.â€

A committee of twenty-five citizens was appointed to direct the execution of the provisions of the resolutions.

This afternoon there was a conference between the committee and a number of the most influential negroes of the city at which it was agreed that the negroes report to the committee at 7 a. m. tomorrow as to whether or not Editor Manly would comply with the requirement of the resolutions. If he does not white men propose to go in full force at 8 a. m. and destroy the newspaper plant and forcibly expel the editor. There is Intense excitement and many fear that the negroes will attempt to protect Manly. If they do the worst can be expected. 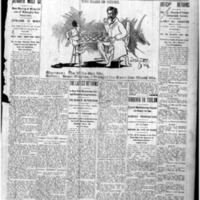