The cartoon â€œUnder Which Flagâ€ emphasizes the importance race and gender played in the post-war South. The cartoon depicted two candidates with their flags and platforms. The white flag has the white rule platform promising good government, peace, prosperity, and the protection of white women. The cartoon characterized black rule as scandalous, corrupt, and insulting to white women. The cartoon clearly places white women at the center of the debate. White there had been a racial component to protection before the war, during Reconstruction the racial component became more pronounced. The cartoon shows that gender was still an important part of politics even after the Civil War. The post war southern society desperately wanted to rekindle antebellum norms after the Civil War. 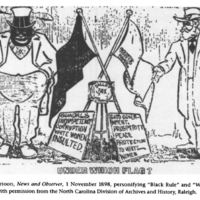