David Schenck was an avid secessionist before the outbreak of the Civil War, supporting disunion as early as 1859. From Lincoln County, North Carolina, Schenck was a lawyer before the war, considered himself too old to serve in the Confederate Army and instead offered his legal services to the Confederacy, as a Receiver. He claimed in his amnesty petition that he lost $6,000 worth of slaves and currently owned $4,000 worth of property, which was eligible for confiscation. Because he was a high-ranking Confederate civil officer, Schenck was exempt from general amnesty.

The North Carolina Receiver was a controversial post during and after the war. His job entailed investigating and prosecuting â€œalien enemies.â€ The Confederate Act of Sequestration was directly inspired by the U.S. First Confiscation Act in August 1861, which allowed Union soldiers to take Confederate property. The Act of Sequestration passed the same month. There was little oversight of who was a â€œtrue and loyal citizenâ€ and almost all power rested with the Receiver, which in south-eastern North Carolina was David Schenck. There was no documentation in the court hearings of the actions of receiver. Instead the men like Schenck relied on civilian information. Through much of the war he did well, earning a significant amount of money and purchasing property in land and people. It did not take long for this procedure to de-evolve into a Confederate witch hunt. Neighbors could turn one another in on suspicion of treason, and often with little evidence. (Weitz 2005, 15-17)

Though a secessionist, Schenck argued that he was not a traitor: rather he was following his own beliefs as a Democrat and a North Carolinian. Schenck wrote in his petition that though he â€œthought of his duty to support and defend that action [secession]â€ after the Confederacy lost he â€œadvocated submission to the power of the United States.â€ Basically Schenckâ€™s argument for amnesty is that when a Confederate he acted as a Confederate, and once the Confederacy was defeated he â€œaccepted the decision of battleâ€ and subsequently became a law-abiding resident of the United States. Hoping to win amnesty, Schenck argued that he followed the rules of whatever country he lived in. (Steward 2012, 111-112)

He was almost as good as his word. Following his receipt of amnesty, Schenck went back to his legal career and joined the Ku Klux Klan. He quickly abandoned the organization after turning in his friends in 1873 to federal authorities to avoid prison time. Having fallen far, and with victims of Sequestration nipping at his heels, Schenck ran in 1878 for Supreme Court of North Carolina. In a tight race, he was called a coward for not serving in the Confederate Army and lost in disgrace. (Steward 2012, 185-192) As he wrote in 1868, â€œI suffered much in popular estimation because I did not join the armyâ€ and his lack of military service plagued him for years. (Schenck Diary, April 15, 1868)

In 1882, he sold his house in Lincolnton and moved to Greensboro, and began researching the Revolutionary War Battle of Guilford Courthouse. Schenck wrote a popular history of the 1780-1781 British campaign in North Carolina. Shortly afterwards he created Greensboro Battleground Company, joining a group of Greensboro railroad elites. The Greensboro Battleground Company celebrated reunion, the American revolutionary cause, and North Carolina. The company deeded the land to the War Department and in the 1930s the Department of the Interior created the Guilford Courthouse National Military Park. (Baker 1995, 25-28)

There are several reasons why Schenck must have needed amnesty. Many of them were tied up in his job as a receiver with the Sequestration Act. Being in charge of prosecuting â€œalien enemiesâ€ in south-eastern North Carolina made Schenck many personal enemies. People who had lost all of their property wanted to take him to court. (Steward 2012, 125) As the receiver, Schenck also made a great deal of money which he could easily lose. Finally, Schenck wanted to return to his legal career. The first answer to all of these issues was citizenship. He could fight his opponents in court, keep his possibly stolen wealth and land, and shoot for a district court position.

Though he promised to stay true to the laws of the Constitution, Schenck had no desire to commit to Congressional Reconstructionâ€™s policies. Schenck never referenced the important issues of race in his amnesty proposal, only promising to follow the "laws of the land." A dedicated white supremacist, David Schenck never attempted to reconcile himself to the Civil Rights Act or the Fourteenth Amendment: â€œI abhor and detest the innovations made on our political government by provisions of the new Constitution.â€ (Schenck Diary, April 12, 1868)

Despite his racist attitudes, President Andrew Johnson still granted him Amnesty. Here was the largest contradiction in the differing forms of Reconstruction. Which was more important: former Confederate loyalty or the rights of southern blacks? If Schenckâ€™s request for amnesty is any indication of the question then the chances for freedmen were slim. Schenck joined the KKK, was accused of murdering a black man, and never supported the Fourteenth Amendment. The fact that he was granted Amnesty shows what the president and conservative Republicans valued. If men like Schenck were given amnesty, without supporting black Civil Rights, then the chances for freedmenâ€™s rights were slim. This issue was never truly resolved and led to the eventual failure of Black Reconstruction.

Andrew Johnson, President of the United States of America.

David Schenck, a citizen residing in Lincolnton, Lincoln Country; State of North Carolina shows to your Excellency that his property is [liable?] to confiscation by reason of his aiding in the late rebellion and that he is not included in your Excellency’s proclamation granting pardons because he was a Civil Officer of the so called Confederate States [word unknown]; that he was appointed a Receiver, in the district court of North Carolina, and acted as such under the authority of the said so Confederate States.

Your petitioner is thirty-years of age and has a wife and three children—he is by profession a lawyer—his property consists in a house and lot where he lives and some other little property in all worth about $2500 or $3000. He lost by the war about $6000 worth of slaves and other property.

Your petitioner was a Democrat, and was taught and believed that his state had a right under the Constitution to secede from the union, and his state leaving by a unanimous vote of [its?] Convention, passed an ordinance of Secession, the thought of his duty to support and defend that action and cause, [while?] his sympathies and influence were with the state and their resistance to the United States.

When Generals Lee and Johns[t]on surrendered your petitioner accepted the decision of battle as against the principles he entertained, and advocated submission to the power of the United States, discontinuing irregular or fractious resistance. Your petitioner as soon as opportunity offered took the oath of Allegiance and the Amnesty-oath and has since then conducted himself in obedience to the orders and law of the United States.

Your petitioner in his former conduct was not actuated by motives of distinction to the other state but simply by the desire to maintain the right—which he supposed remained [with? Own?] state; this right having been submitted to the adjudication of war and decided against him. He is willing to accept it as final and hereafter to conduct himself in accordance with the laws of the United States as a peaceable and good citizen.

Hoping therefore that Your Excellency will generously appreciate the honesty of my coruse as I have not endeavored to conceal [words crossed out] anything or deceive you. In professing what I have been what I was not, and as I am now as honest in my purpose of submission as I was of resistance, I pray your Excellency to grant me a special pardon under this pronouncement and condition of his Excellency’s proclamation of May 29, 1865.

Weitz, Mark. Confederacy on Trial: The Piracy and Sequestration Cases of 1861. Lawrence: University of Kansas, 2005. 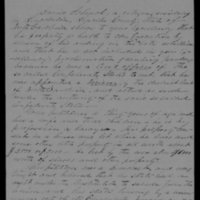 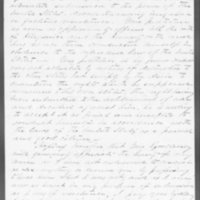 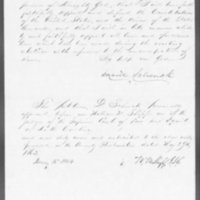 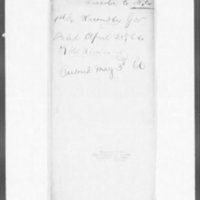 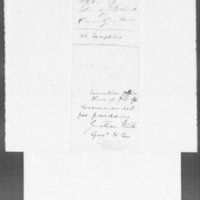