Edward Hood was a private during the Second World War, his grave is an example of how commemoration changed during the World Wars. Instead of saying what state he was from, the grave describes what branch of the military he served in. National trumps state. 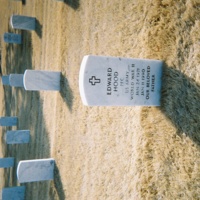