â€œThe Declaration of Independenceâ€ by John Trumbull is a very interesting primary source as it can symbolize significant things that are important to a historian. Upon first noting this painting where it sits now in the national Rotunda, it appears that John Trumbull was painting the scene of the signing of the Declaration of Independence of the United States of America from a first-hand account by recording a snapshot of the moment he experienced just before John Hancock swiftly signed his signature in an oversized font. I came to this same conclusion the first time that I was supposed to examine Trumbullâ€™s picture and because I had no familiarity with the faces of the nationâ€™s founders, they all seemed to fit the bill. However, the reason this is an important primary source document is not because it provides the viewer with a first-hand account of the ratification of the United States; in fact the artist was never even at the signing of this most prized document. This painting, produced 41 years after the actual signing of the Declaration of Independence provides the viewer with the account of an artistâ€™s perspective of the growing country in 1817. To artists like Trumbull, producing large paintings of the founding of the nation was a very valuable way to make money; however, since these artists were usually reaching adolescence during the 1770s, most of their images were romantically imagined. Furthermore, like Trumbull, the men in the foreground of the painting, gathered around the table were also not present for the founding of the United States; instead they were wealthy aristocratic men who paid Trumbull heartily to put their faces on a document that would be closely held to American masculinity throughout the generations to come. The lesson that I have been able to learn through developing this research on Trumbullâ€™s painting has taught me to look under the surface when analyzing primary sources as the author/artist usually had a specific agenda tied to creating the document and, for me, understanding the context is just as important as reading the source. 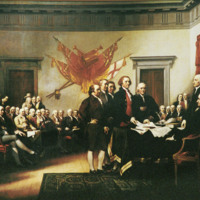