Small plot farmers who had little stake in the war were driven to enter the Confederate Army at first by a sense of loyalty to their state. However, in 1862 it became necessary for the North Carolina to institute a draft. Within the first year of the war the horrors of battle became known, and less men were willing to risk their lives for an institution (slavery) that had little impact on their lives. Men in Western North Carolina were drafted at gun-point, in the Piedmont region there was a large Quaker force who were against the war, and the coast was under Union control beginning in March 1862. This gave rise to a new form of protesting the war, desertion. North Carolina had the highest desertion rate in the Confederacy, the men there did not see the point in dying to keep the slave institution alive for a small elite.
Katherine Giuffre used an 1860 U.S. Census and North Carolina troop records to find information regarding the sociology-economical background, date of enlistment, rank at the time of enlistment, information about time in the Army and information regarding date of desertion of 120,000 North Carolinian men. Using this information, Giuffre finds out the motivations and likelihood of desertion.
Variables such as the region of residence, whether the man was the head of a house-hold, the number of slaves the man may have owned, occupation before the war, wealth, whether the man ever received a promotion, date of enlistment and age at enlistment showed a trend to support the hypothesis that poorer, small plot farmers who had family responsibilities deserted more often than others. This all corroborated the statement that it was a "rich man's war, but a poor man's fight."

"In place of open mutiny, [powerless groups] prefer desertion...They make use of implicit understandings and informal networks...When such stratagems are abandoned in favor of more quixotic action, it is usually a sign of great desperation." Scott (1985:xvi)

At the beginning of the Civil War, few suspected how brutal and bloody the conflict would prove to be. During the first months of the war, thousands of men and boys from North Carolina rushed to enlist. As disease and battle mounted dramatically, soldiers who had agreed to serve for one, two, or three years found themselves legally compelled even after their enlistment was up, and those who stayed home enlisted reluctantly in the face under the threat of draft (Wright 1978). Detained in the Confederate army often by threat of imprisonment or even death (ibid.), obliged to fight for a cause that appeared increasingly to be contrary to their own interests (Bardolph 1964), watching as the wealthy plantation owners resigned their commissions and bowed out (Tatum 1934), thousands of soldiers took up one strategy of resistance to the war: desertion. 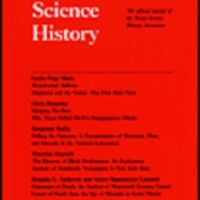