I have always had an interest in history. I can remember as a young boy fighting my way through the woods with my father near my grandparentsâ€™ house to get to the old family graveyard. I was fascinated by one grave in particular. It was marked with a simple rock placed in line with the rest of the headstones. My father told me the story about the grave that he grew up hearing. The grave belonged to our relative, Joseph Stanton, who fought in the Civil War with Company H of the 1st North Carolina Artillery at the Battle of Fort Macon. As the story goes, he was one of the first men killed when the gun he was manning was struck by a Union artillery shell. His body was smuggled out of the Fort to Beaufort by boat under the cover of darkness and then transported the rest of the way by carriage. Over the years the graveyard was swallowed up by the dense North Carolina forest, until my father made it his project to bring the site back to life. My father worked tirelessly to clean up the site and confirm the story of Joseph Stanton. His efforts were rewarded when the Veterans Administration provided a brand new headstone to mark Joseph Stantonâ€™s grave. Those trips into the woods and my fatherâ€™s efforts to resurrect the old family graveyard brought history to life for me. It wasnâ€™t just something interesting I watched on television anymore, it was something present in my life, mysteries waiting to be uncovered. 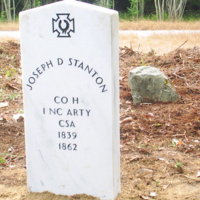