Williams Woods Holden was the governor of North Carolina from 1868 to 1871. He was the first governor to ever be impeached in North Carolina. His impeachment was directly related to the actions he took against the Ku Klux Klan. This excerpt from Holdenâ€™s memoirs pertains to his concerns about the Ku Klux Klan. He asserted his belief that this violence should be stopped. He also emphasized that Major Moore downplayed the amount of Klan activity in North Carolina. Holden argued that he was in a position where he had to put down the violence or walk away defeated.

"The persistency of President Davis, at Richmond, in refusing to make overtures to Mr. Lincoln, in order to break the force of the coming overthrow, led to secret propositions by certain members of the Confederate Congress from other States, in which they besought Ex-Governor Graham to approach Gov. Vance on this subject. Gov. Vance refused to take any part in such a scheme."

The last sentence in the above paragraph may not be entirely just to Gov. Graham, for it may leave the impression on the mind of the student that he approved these "secret propositions," and was, therefore, covertly disposed to abandon the Confederacy. I am sure I may truly say that, after Gov. Vance's Wilkesborough speech, which separated him and myself, Gov. Graham stood by him unflinchingly to the last. But I think he had misgivings as to his course. I remember vividly a protracted interview in the Executive Mansion between Gov. Graham, Gov. Vance and myself, in August, 1863. The conversation

lasted two hours. It might not be proper to repeat all that was said on the occasion. The utmost candor was shown by all of us. Mr. Satterthwaite, of Beaufort, was present. He is dead, and Gov. Vance and myself are the only survivors. I believe I may truly say that, in this conversation Gov. Graham agreed with me rather than with Gov. Vance. It is probable that Gov. Graham took no active part for State action looking to an honorable peace, because he hoped and believed that Mr. Davis himself would make overtures for peace. I have it from a distinguished ex-member of the Confederate Congress from this State, that at Gov. Graham's request he sounded Mr. Davis early in 1865 as to his final purpose in this regard, and that the answer of Mr. Davis was, and given with emphasis, "I will never accept any peace short of the independence of the Confederacy." When this answer was reported to Gov. Graham, he said, "then Mr. Davis has deceived me."

The demand for an honorable peace flashed like fire throughout this State in August and September, 1863. Within eight weeks one hundred peace meetings were held, composed mainly of men who had elected Gov. Vance. These meetings tested Gov. Vance's native firmness. He was not moved by them in his steadfast adherence to the Confederacy. It has been said that these meetings led to desertions from the army. But the "peace" men had no such purpose. The Standard files will be searched in vain for any intimation even that North Carolina soldiers should desert their colors. The motto of the "peace" men, which I received from the lips of John A. Gilmer,

was, "Let us fight and talk for peace at the same time." North Carolina was at that time at fever-heat for peace, and I think it more than likely that these meetings were safety valves to the Confederacy; for the people at home, having expressed their views and opinions, and finding that nothing could be done to arrest the war, relapsed into their condition of suffering and endurance, and "waded deeper" as Maj. Moore said on page 230, "into the crimson flood." Indeed, the exmember of Congress to whom I have referred, and who was a good Confederate, told Mr. Davis that if something was not done by him looking to peace, North Carolina could not be held to her place in the Confederacy.

Under the head of 1867 and 68 I quote as follows, from pages 250 and 252: "In society there was great confusion in the presence of two rival secret societies. These were known as the Union League and the Ku Klux Klan. The negroes and a few white men belonged to the former, and, in those sections of North Carolina where the Regulators of old were found, the famous White Brotherhood or Ku Klux also became numerous during the years subsequent to the advent of their rival.

"The year closed in with apprehension to all classes in the South. The new State governments were greatly disturbed by the Ku Klux, and in the pandemonium of bribery and corruption developed in the different assemblies was justification for the fears of the men who, in the reckless appropriations, foresaw ruin to all material interests of the State."

It is not my purpose to defend the Union League

or to assail the Ku Klux Klan. It is sufficient to say that the former was comparatively harmless, and was unarmed, and that the latter was armed. I was myself at the head of the League in this State, and the violations of law complained of were without my knowledge and against my orders. The rituals of this order were freely distributed everywhere, and those who read them will remember that they simply inculcated what was then known as loyalty, with industry, especially among the colored people, and obedience to law. The day before I took the oath of office of Governor in Capitol Square, I resigned my position as chief of the League in this State, because I could not have on my conscience my oath as Governor and at the same time an oath binding myself to a secret political society. I have not, since that day, attended and League meeting. My correspondence as Governor, in 1870, with Captain Pride Jones, of Orange, which is of record, will show that I deprecated all secret political societies, and that I did not, while I belonged to one of these societies, proceed to put down another one of them, namely, the Ku Klux. Maj. Moore is mistaken in assuming that the Ku Klux were for the most part numerous in the ancient territory of the Regulators. It is true, if my recollections be not at fault, that the Honorable John W. Norwood stated in the Senate, in 1873, that there were, or had been eighteen hundred Ku Klux in the County of Orange; but this order existed, as I think, in a majority of the counties, and, as some of the members of it swore before the courts, the number was not less than forty thousand in the State.

Maj. Moore states the fact that the new State governments were greatly disturbed by the Ku Klux. He also does me the justice to state that, in repeated proclamations I demanded that violence should cease. This I did in five proclamations and in numerous letters and orders, for the space of eighteen months, from October 1868 until June 1870; but all my appeals for law and order and peace addressed to both parties, were in vain. One of two courses was before me: Either to enforce the law with a strong hand, and thus make the fight of the sword, and not the use of it, as I did, the instrument for restoring civil power; or to resign my place and skulk from my oath and my duty into retirement. I could not do the latter, and hence I acted. I have no doubt I made blunders and mistakes in some of the means which I employed to suppress the Ku Klux, but let me ask, did the Union and Confederate commanders make no mistakes in their operations during the late war?

Maj. Moore would leave the impression, on page 255, that there had been "great improvement in peaceful relations" until May, 1870, when Senator Stephens was murdered in Caswell court house, and said "on the publication of the news of the murder of Mr. Stephens, Gov. Holden hastened to carry out the intention of the framers of this (the Shoffner) statute." He adds significantly, on the same page, "the election was to occur on the first Thursday in August."

I am obliged to the historian for these statements, because they enable me to state a fact hitherto

unknown to the people of the State. Governor Graham dwelt much in the impeachment trial on the fact that I began my military movement only a month before the August election; and he thence drew the inference that my purpose was to influence the election thus near at hand. The Senate or impeachment court had ruled that no witnesses outside of the two counties in insurrection could be heard in evidence. The Legislature had appropriated seventy thousand dollars to be used by me in enforcing the law. If the Hon. David A. Jenkins, the State Treasurer, could have been heard as a witness, he would have sworn that it was my wish to begin the movement at least two months before the election; that he had no funds in hand at that time that I could use; and that he notified me on the first of July that he was in receipt of ninety thousand dollars, dividends from the North Carolina Railroad and that I could have the seventy thousand from the amount thus received. I think this explains the matter to the satisfaction of every fair-minded man. My recollection is that W. R. Albright, Esq., of Alamance, swore before the impeachment court or before the court in chambers, that he had told me a week or two before the election that while he approved my course, yet the shock to the people of the State was so great as the result of my course that he feared the result would lose the State; and that I replied in these words: "I do not care how the State goes, if by what I am doing I shall save one human life." I declared that all I desired was a free ballot and a fair count; and that I was moved solely in what I did by a wish to protect

life and property; to protect the poor and the humble as well as the rich, and that, too, without regard to race or party.

Thanking you, Sir, for your kindness and courtesy in publishing my letters, I am 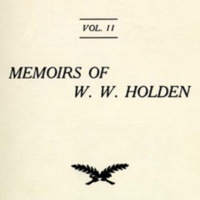