I was an English major for my early years at State, but the sheer number of literature classes that I was taking was slowly driving me insane. As a result, I never ended up taking a large number of English classes on any given semester, as having to read three books of supposedly great literature a week was more than I cared to put up with. This is not to say that some of those works were not truly great literature or that many of them were not worth reading. I eventually found, though, that the readings from the history classes that I fairly frequently took were a lot easier to get through because there were far fewer occasions while reading where I found myself asking why I even gave a damn. It turned out that I was far more interested in the study of history than the study of English, (though the creative writing element is still quite engaging for me) and it was while taking a series of British history classes that I finally decided to make the switch from an English to a History major. The Glorious Revolution of 1688-1689 was an event that was thoroughly explored during the British history classes that I was taking at that point, so I have included a draft of the Declaration of Right to remind myself of the classes that influenced my decision to become a history major. Fortunately, my own ideological shift contained far less hatred of Catholicism than the shift associated with the Declaration of Rights though an English history document having played a role in my moving away from the study of the English language is still somewhat amusing. I was studying American English though, so I expect that the British would claim the parallel doesnâ€™t really work.

"Draft of the Declaration of Rights, 1689," accessed September 2, 2014, http://www.nationalarchives.gov.uk/pathways/citizenship/rise_parliament/docs/declar_rights.htm.

The Declaracion of the Lords Spiritual & Temporal and Commons
Assembled at Westm[inster]
Whereas the late King James the second by the assistance of diverse evill Councellors Judges and Ministers imployed by him did endeavour to subvert and extirpate the Protestant Religion and the Lawes and Libertyes of this Kingdome.
By assumeing and excerciseing a Power of dispencing with and suspending of Lawes and the execution of Lawes without consent of Parliament.
By committing and prosecuteing diverse worthy Prelates for humbly petitioning to be excused from concurring to the said assumed Power.
By issueing and causeing to be Executed a Commission under the Great Seale for erecting a Court called the Court of Comissioners for Ecclesiasticall Causes.
By levying money for and to the use of the Crown by pretence of Prerogative for other time and in other manner then [than] the same was granted by Parliament.
By raiseing and keeping a standing Army within this Kingdom in time of Peace without consent of Parliament and quartering Souldiers contrary to Law.
By causeing severall good subjects being Protestants to be disarmed at the same time when papists were both armed and Employed contrary to Law.
By violateing the freedome [of Election] of Members to serve in Parliament.
[passage struck through and partly obliterated]
By Prosecut[ions in the Court] of Kings Bench for matters and Causes Cognizable only in Parliament and by divers other Arbitrary & illegal Courses. 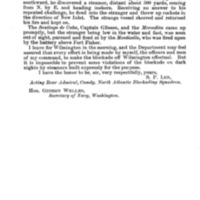