This interview with Franklin McCain—one of the original four student demonstrators in 1960—embodies a cultural obligation—youths especially—to question the morality of racial inequality in American society.  As a cultural historian, my interests pertain to a wide variety of historical events, but the 1960s easily serve as my favorite time period of history to study and make sense of the United States, both then and now.  In 2014, political inefficiency and public opinion still plagues American society despite the organized efforts of historical minority groups subordinated in society whether based on race, economic status, gender, age, ethnicity. The nonviolence of the student sit-ins in 1960 in Greensboro, North Carolina served as a catalyst for the Civil Rights Movement which sought major social and economic reformation with heavy political intervention.  However, many features of the movement were repressed due to the lack of appreciation for cultures and ideologies foreign to the American elites’ mindset in the 1960s.  The simplicity and innocence which defined this sit-in represented these four African Americans students’ bravery and ability to resist conformity to unacceptable social conditions for nonwhites.  Considering the time I have dedicated to equality studies, this document appeals to me in its analysis of nonconformity and the increasing confidence of movements and beliefs that radically shaped the public discourse of the 1960s.  Essentially questioning the outdated traditions of American society, these students’ actions highlighted the majority of the nation’s reluctance to analyze the obvious political and economic injustices which perpetuated the inequality between classes of American society.  Despite the copious amounts of violent backlash and racial prejudices still present in 1960, these students and followers alike remained unaffected—on the surface—by the drastic measures taken by American politics and society, thus creating a platform for more cultural responses to form in protest of the nation’s disregard for public opinion.

Oh, hell yes, no question about that. [Laughs] At that point there was a policeman who had walked in off the street, who was pacing the aisle...behind us, where we were seated, with his club in his hand, just sort of knocking it in his hand, and just looking mean and red and a little bit upset and a little bit disgusted.  And you had the feeling that he didn't know what the hell to do.  You had the feeling that this is the first time that this big bad man with the gun and the club has been pushed in a corner, and he's got absolutely no defense, and the thing that's killing him more than anything else--he doesn't know what he can or what he cannot do.  He's defenseless.  Usually his defense is offense, and we've provoked him, yes, but we haven't provoked him outwardly enouh for him to resort to violence.  And I think this is just killing him; you can see it all over him. People in the store were--we got mixed reactions from people in the store.  A couple of old ladies... came up to pat us on the back sort of and say, "Ah, you should have done it ten years ago. It's a good thing I think you're doing. 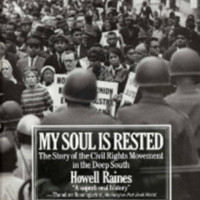