â€œPeace,â€ said Edmund Burke, â€œmay be made as unadvisedly as war. Nothing is so rash as fear, and the counsels of pusillanimity very rarely put off, while they are always sure to aggravate, the evils from which they would fly.â€ What this country needs to secure peace is the firm application of a plain principle. The principle of State rights, like that of country rights and town rights, is a good one. But the principle of national rights is the paramount and essential principle of the present situation. All subordinate rights whatever must bend to the national necessity of a local government in every State based upon the consent of the whole body of loyal freemen.

The national authority is fully competent to secure that government. There is no reason whatever why the nation should delegate its authority to secure such State governments in the South to a part of the loyal freemen resident there. At this moment no one loyal freeman of North Carolina has any right to a voice in reorganizing the State which every other does not equally possess. There is no more reason, except in an imaginary view of policy, why the national Government should authorize white loyalists alone to reorganize the State government of North Carolina because the voters in that State were formerly white than that it should authorize the colored loyalists alone to reorganize it because they have been always faithful to the country. As a question of policy merely, it is clear that if any class of loyalists object to reorganize the State upon acknowledged democratic republican principles that is not a class to which the reorganization can be safely intrusted. It is better policy to govern the State directly by the national authority than to relinquish it to such a class. 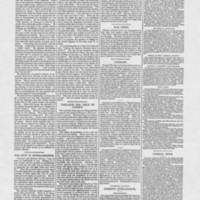