Harper's Weekly published the article, "The Ku-Klux," on April 1, 1871. The Ku Klux Klan, also known as the Klan, was a group that relied heavily on violence as a way to restore white supremacy. The Klan sought to restore the power of the Democratic Party. The Klan also prohibited freedmen from voting through the use of violence. This article discussed the violent threat that the Klan imposed upon the newly freed slaves and supporters of the Union. The article emphasized the power of state's rights during Reconstruction, and the hands off approach the federal government used in response to Klan violence. The article was concerned that the federal government would fall into the hands of the Klan. It also implied that the only way to end the influence of the Klan was for the federal government to step in and protect its citizens.

The Ku-Klux question has become very serious. Before the war a citizen of the United States who believed in the Declaration of Independence, and said so, was outlawed, harried, and liable to be murdered in half the country. It was safer for a free-tongued American, who held to the rightful equality of all men, to travel in Central Africa than in South Carolina under the flag of the United States. Now that the war is ended, no conspicuous Union man, and no colored citizen who takes an active and positive position in sympathy with the Union, is safe from assault or murder in a large part of the old Slave States. If he complains, he is told that the local courts are open to him. If he replies that the mob holds the courts, and that he has the same protection that the Abolitionist in the interior of Mississippi had against the slavery assassins fifteen years ago, he is told that he has the ballot, and he must right himself at the polls. If he replies that the mob, which is supreme, prevents his voting, he is told that that is his misfortune, but that the United States authority can only interfere in a State upon the requisition of the governor. If he says that the governor is the Ku-Klux, he is told that it is a pity; but that the principle of the government requires that every State must protect its citizens. And he is asked, in turn, if the United States should interfere at its pleasure in every State by a mere resolution of Congress, how would it be with him if his friends should lose power, and the friends of the Ku-Klux come in? To which he would, of course, reply that it would certainly be no worse for him-and it would not. But how would it be elsewhere and hereafter?

The question is undeniably a very grave and difficult one. The States rights answer, however, is very short and simple. The Southern States, is says, from an unnatural fostering of slavery and the inevitable consequences of war, have lapsed into quasi-barbarism, and they must work themselves clear. They must learn by experience. They must civilize themselves. This answer would be more satisfactory if the barbarians were not voters in a common Union, and adherents of a great party which contests its government. In view of that fact the practical question immediately is, whether that situation of things could be changed by legislation. And if it could, if the protection of those whom the Ku-Klux keeps from the polls by terror would prevent the national government falling into the hands of the Ku-Klux party, ought they not to be protected and the government saved?

Granting, as every sensible man must, that the process of reconstruction has been altogether too swift, and that the States in rebellion should, under the peculiar circumstances, have been much longer directly held by the national authority, shall nothing be done to avoid the ill effects of the haste, even to the control of the government by its open enemies? For every man knows what spirit would animate a Democratic national administration. Every body remembers that the last Democratic Convention was swayed by rebel chiefs rejoicing in their rebellion, and that a great portion of the party see with satisfaction now the very barbarism of which we speak. If our political system really be one which forbids the government to protect its own citizens when voting for its officers, and which requires the country to look on passively while mobs controlling various State authorities harry those voters, it will certainly be necessary to reconsider some of our raptures over the infinite superiority of the American to all other possible systems of government. But if the United States authority will amply protect its citizens at the national polls, and secure the equal liberty which is guarantees, it will, perhaps, solve the problem. For then its military force would be large enough in every disaffected State, without superseding the local authority, to give heart to good citizens. 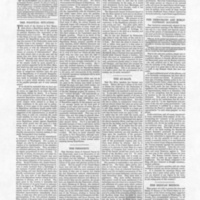