"A Proclamation by His Excellency, the Governor of North Carolina," October 12, 1868

"A Proclamation by His Excellency, the Governor of North Carolina," October 12, 1868

"The flag of the United States waves for the protection of all. Every star upon it shines down with vital fire into every spot, howsoever remote or solitary, to consume those who may resist the authority of the government, or who oppress the defenseless and the innocent. The State government will be maintained; the laws will be enforced; every citizen, whatever his political sentiments, will be protected in his rights; the unlawful use of arms will be prevented, if possible, and if not prevented, will be punished; and conspiracy, sedition and treason will raise their heads only to be immediately subdued by the strong hand of military power. The General commanding this department has instructed the district and post commanders to "act in aid and co-operation, and in subordination to the civil authorities," in maintaining the peace and in securing a free election. The power of both governments is thus pledged to peace, order and tranquility.

"It is specially enjoined on all officers of the Detailed Militia to observe the "act to organize a militia of North Carolina," and to act in strict subordination to the civil power. And all Magistrates, Sheriffs and other peace officers are also specially enjoined to be vigilant, impartial, faithful and firm in the discharge of their duties, magnifying and enforcing the law, ferreting out offenders, protecting the weak against the strong who may attempt to deprive them of their rights; to the end that the wicked may be restrained, the peace of society preserved, the good name of the State maintained, and the government perpetuated on the basis of Freedom and Justice to all.

"Done at our city of Raleigh, on the 12th [L. S.] day of October, in the year of our Lord one thousand eight hundred and sixty-eight, and in the ninety-third year of our Independence.

In addition to this I issued four other proclamations down to June 6, 1870, urging and beseeching the people without respect to party or color, to respect and venerate the law, to protect and preserve human life and to demean themselves as good citizens.

By the Constitution of this State I was empowered to be commander-in-chief to call out the militia, to execute the law, suppress riots and insurrections, and to repel invasion. On the 16th day of December 1869 I sent the following message to the Legislature:

To the Honorable, the General Assembly of North Carolina.

"Gentlemen: - Allow me respectfully and earnestly to call your attention to the necessity which exists for such amendments to the militia law as will enable the executive to suppress violence and disorder in certain localities of this State, and to protect the persons of citizens, their lives and their property.

"Since my last annual message, dated Nov. 16th, 1869, numerous outrages of the most flagrant character have been committed upon peaceable and law-abiding citizens, by persons masked and armed, who rode at night, and who have thus far escaped the civil law. I have adopted such measures as were in my power to ferret out and bring to justice all breakers of the law, without reference to their color or to the political party or parties to which they belong, and I am satisfied that Judge and solicitors in the various circuits have been prompt, energetic and impartial in the discharge of their duties. Notwithstanding this, Gentlemen, the outrages referred to seem to be rather on the increase in certain localities in so much that many good citizens are in a constant state of terror and society in said localities is in a deplorable condition. It is for your honorable body to apply the remedy by so strengthening the arm of the executive as to enable him to repress these outrages and restore peace and order. I have confidence in your wisdom, in your regard for law, and in the disposition which I feel sure exists in every member of your honorable body to adopt such measures as will speedily put an end to the evils complained of.

"I have the honor to be, Gentlemen, with great respect,

This message of the Governor, of the 16th of December, 1869, led to the enactment of what is called the Shoffner law. This law authorized the Governor to declare certain counties in insurrection. That is, it suspended civil law and authorized the arrest of suspected persons. The reader will perceive that at last my duty required me to do this, as this message states. The violation of law and the outrages referred to, seemed to be rather on the increase in certain localities, and left me therefore no alternative, but to proclaim Alamance and Caswell in a state of insurrection. The gist or substance of the Shoffner act was to authorize me to suspend the civil law when in my judgment it was necessary to do so. I was fully aware of the great responsibility, but human life was above all price. As I said to Mr. Albright of Alamance, I did not care how the elections of 1870 went if by what I did I saved one human life. The civil and military are alike constitutional powers; the civil to protect life and property when it can, and the military only when the former has failed. 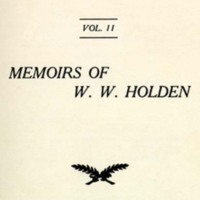