In this document, the author examined the harsh differences between blacks and whites in the southern judicial system and also described many accounts of crimes committed in North Carolina by both blacks and whites. As anticipated, the sentences of blacks were much more harsh and oppressive than the almost nonexistent punishments of North Carolinian whites. The article, published in 1880, also discussed the distrust and inequality prominent in the South. Moreover, the author described the social and political inequalities of the time period, including the lack of representation for blacks and the unbreakable economic gap between whites and blacks, especially in North Carolina and other southern states where slave labor had provided ample financial benefits to white landowners and businessmen. The document also noted the extreme levels of racial violence and economic discrimination that appeared evident in the majority of the convictions detailed throughout the article.

GREENSBORO, Oct. 3.- If the terrible civil war, which cost this country so much of blood and of treasure, was not fought altogether in vain, if the Reconstruction acts and the amendments to the national Constitution are not entirely without force, it must be admitted that in all parts of the United States all men of all colors are entitled to the same equal and exact justice before the law. It is a fact beyond question that, under the government of Republicans in the Southern States, such evenhanded justice was accorded to every man of every condition. But their government ceased. The Democrats came into power. By wholesale fraud and cold-blooded, cruel, cowardly murder they captured all the cotton State Capitals. Still, despite their crimes--or it may be in the hope of concealing their crimes--they were at that time very fair-spoken. They declared through all their public men in all parts of the country, with all the impressive eloquence of which they were capable, that they had accepted every result of the war in the best of faith; that they fully acknowledged the citizenship of the negro, and would be jealous in their guardianship of all his rights under the law. The generous and confiding people of the North accepted these pledges. How their confidence has been abused the record proves. Recent elections in South Carolina, Alabama, Louisiana, and Mississippi have shown only too clearly the scant respect in which Southern Democrats hold the political rights of their opponent. Upon that particular portion of the subject nothing further need be said at this time. Upon and another kindred point, however, there is much which must be written.
Do the Republicans of the South, white or black, receive impartial treatment before the Democratic courts? On the one hand, in deep sorrow and bitterness of spirit, this question is answered in the negative, while, on the other, white Bourbons of every class unite in vehement protestations of the goodness and fairness of their Judges. Which side is right? In answer to this question I have taken no man's testimony. The records of the courts speak for themselves. And, in this connection, it must be distinctly understood that every court and all the court machinery in North Carolina, as in all the States south of here, is absolutely controlled by the Democrats. Of all the States in question, North Carolina is justly entitled to the credit of being the most liberal, and from the most enlightened, intelligent, and law-loving portions of this State I am now writing. Greensboro is the county seat of the section in question. From official court records obtained here the following incidents have been compiled. They are presented, as far as possible, without comment. They need none. Their simple recital ought to prove conclusively whether or not negroes and Republicans are discriminated against in the Democratic courts of the South. 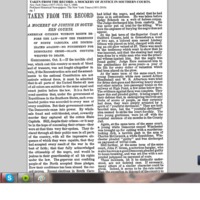