Not many people know that Caswell County, North Carolina, had a fairly large population in the nineteenth century. Tax and census records, however, show that the county was large enough to be split into districts to account for all residents. Thomas Day appears in the Richmond District of the county in four tax records. Even though Caswell County did not seem to have a large population, they actually were considered a larger community. In census records there are over 100 pages of people with about 30 people on each page. Even though Caswell County was not as large as Wake County (which had over 1000 pages of census records), Caswell still had a substantial amount of people.

Records also show the amount of land that Thomas Day owned during each tax collection. During one of the tax collections, Thomas Day owned 72 acres of land, which is a substantial number for a free black. This number might be surprising to people today because Day was a furniture maker. After this tax record, Day's land decreases but the highest amount of land he owned was 72 acres. 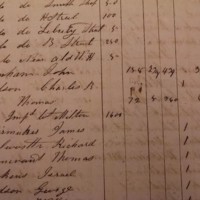