This article, "The Lesson of the Ku-Klux," was written on May 27, 1871, and published in Harper's Weekly. Harper's Weekly was a Republican newspaper. The Klan violence that took place in the Southern states was spurred by the Democratic Party. The Ku Klux Klan was also a major problem in North Carolina. This article was concerned with people denying the activity of the Klan. The article suggested that people expected the violence of the Klan because of the rights of freedmen. The article declared that states should restore order because everyone deserved to exercise the rights that they were born with.

The Lesson of the Ku-Klux

Those who persistently deny the truth of the Ku-Klux stories, or ridicule them as mere tales of rawhead and bloody-bones, should remember that, whatever the explanation may be, the testimony is conclusive. And the presumption in favor of the general truth of the reports is decided. Just before the rebellion Mr. F.L. Olmsted, a remarkably sagacious traveler, made a journey through the Slave States, carefully observing and noting every thing that he saw. He did not write as an Abolitionist, nor as a partisan of any kind; and he did for the Slave States what Arthur Young did for France just before the great revolution of '89-he gave a faithful and detailed picture of their condition. If represented a kind of medieval state of society. There was great wealth in a few hands; luxury of a certain kind; enormous estates; and upon the other side immense ignorance, squalor, and barbarism. Mrs. Stowe's story of "Uncle Tom's Cabin," like Smollett's novels in England in the last century, also depicted the aspects of society in that region with a vividness for which the historian will be grateful.

The probable truth of the Ku-Klux reports rests upon two considerations. The great proprietors, who had poisoned the minds of their dependents with every kind of false theory and passionate appeal, at last dragged them into a war, in which they were utterly defeated, amidst the desolation of the country, the paralysis of industry, and the uprooting of all local social, political, and industrial traditions and organizations. The end of active hostilities was followed by the incursion of all kinds of useful and useless persons into the disordered region. The situation was perplexed by political uncertainties at Washington. False hopes rose for a moment in minds brooding upon revenge, and their extinction did not extinguish bitterness and jealousy. This ill feeling was fostered and sustained by the hope of ultimate advantage from political alliances in other parts of the Union. And when the military presence of the successful government was withdrawn, nothing under the circumstances was to probable as constant ebullitions of anger and lawlessness. Had there been no emancipation and no equal suffrage, the condition of a population, ignorant, impoverished, and baffled in the frantic effort to reverse the course of civilization, would have been one of agitation and insecurity.

But to all this there was added in the Southern States a peculiar presumption that there would be such disturbance as we see. The war had freed the slaves, to confirm whose bondage the Southern chiefs had provoked it; and those slaves had become, from the necessity of the case, the political equals of the master class, and in many places they were the majority. To understand the probable feeling of an ignorant population, whose color alone was the sign of absolute social and political superiority, when they suddenly found those whom they had despised as pariahs their equals, and often their official superiors, it is only necessary to read Mr. Olmsted's book. Just as this population, when it thought it was to have all the power after the war, endeavored by black codes to retain all that was possible of slavery, so, when it finds that the power has passed from its hands, vents its rage in outrages, which it hopes may inspire so deep and general a terror that the power may be recovered even under the new conditions.

Therefore, both for this general and this particular reason, a disordered and almost barbarous situation was to be expected in many parts of the Southern States. And that impatience and indignation have been often justified in those States we do not doubt. That the new voters were, as a rule, ignorant, and that the new governments have often been as extravagant and corrupt as the old governments often are in other States, is not to be denied. We offer no excuse for political knavery any where. But we are speaking of public order; and we repeat that those who deny the disorder in many parts of the Southern States, or affect to laugh it away, are sneering at all experience. In his interview with the delegates from the Tax-payers' Convention in South Carolina, Governor Scott said that the embarrassment of the States was mainly due to the disturbed condition of the public mind, and to the sense of insecurity to life and property. So Governor Alcorn, of Mississippi, asked from Legislature a mounted patrol to assist in keeping the peace. Certainly experience and common-sense teach that the surest method of permanently restoring order in that region is not to encourage every element of disorder, but to show that the general police of equality, against which all the disturbance is a protest, is the fixed and final policy of the American people. 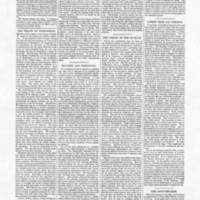