The following excerpt covers the family history of the Lowryâ€™s from the initial patriarch of the family, James Lowrie, and the events that occurred prior to the rise of Henry Berry Lowry in his criminal career. During this description of the family and their history, Mary Norment, a ferverant opponent of the Lowry gang, and of Henry Berry personally, describes the first two generations of the family in very generous terms and even goes into great detail about the efforts made by the elder son of James Lowrie during the Revolution and only within the generation prior to and during the lifetime of Henry Berry that this depiction turns to be unflattering and malicious.

James Lowrie, a tall well-proportioned, fine looking, respectable Indian first settled in Robeson county about the year 1769. This was Bladen county at that time. On the 9th of August, 1769, James Lowrie bought a tract of land containing one hundred acres from William Fort, to whom it was granted by George II. in 1748. He also entered another tract of land containing three hundred acres adjoining the above tract, the grant being signed by George III. On the above mentioned tracts of land, now owned by the heirs of the late Col. Archibald McEachern, James Lowrie first settled.

About five hundred yards below the residence of Col. McEachern, in a bend of the swamp, is shown the place where James Lowrie resided. McPhaul's mills, on the same swamp, are distant about three miles. This swamp was called Lowrie Swamp, after James Lowrie, who resided on it. A ford at the time he lived there crossed the swamp at his residence. Here he raised stock, farmed in a small way and kept a tavern during the Revolutionary War. James Lowrie first came to Robeson (then Bladen county) from Bute county, (now Franklin and Warren counties) in company with Silas Atkins, who emigrated also from Bute county, from that portion now called Franklin. Other families also, viz. the Thompsons Kitchens Coles, Drakes. Moores Humphreys, Bridgers, and whose descendants still live in Robeson, came to Bladen county, (now Robeson) from that part of North Carolina embraced now in the counties of Franklin, Warren, Nash and Edgecombe and settled here about the time that Silas Atkins first built on the tract of land now owned by William H. Graham.

James Lowrie, from whom all the Lowries in Robeson descended, lived in Franklin county before he emigrated to Robeson. It was in Franklin county, N. C., that he was manumitted by his father, James Lowrie, of Virginia, who when Virginia became one of the United States, was elected a Judge, and was ever afterwards known as Judge Lowrie. He was of cavalier stock and characterized by elegance and refinement of manners, tall and commanding in personal appearance, urbane, courtly and genteel in his whole deportment. It was in Franklin county that James Lowrie married. His wife's maiden name was Sarah Kearsey, (nicknamed Sally Kearsy,) a half-breed Tuscarora Indian woman, and from this couple all the Lowries in Robeson trace back their origin.

The above statement in regard to the origin of the Lowrie family in Robeson county is not current rumor, but a true statement, as given by James Lowrie himself and corroborated by Silas Atkins, with whom he came to Robeson county in 1769, also confirmed by the late Neil Brown, Esq., who lived on Richland Swamp; by the late Mrs. Nancy Smith, mother of Rev. A. Smith, who also lived on Richland Swamp; by the late Sampson Bridgers, father of J. D. Bridgers, Esq., by Henry Thompson; by Nathan Thompson; by John Thompson, by Peter Monroe, and last, though not least, by the late John Gilchrist, Esq., long a practicing lawyer at the Lumberton Bar, whose father bought out James Lowrie in 1791, at the close of the Revolutionary War.

James Lowrie had three sons, viz: William, Thomas and James, and at the commencement of the Revolutionary War William, his oldest, being then about grown, entered into the struggle for independence and joined the brave and patriotic band, then under the command of that noble Whig patriot, Col. Thomas Robeson, after whom and in honor of whom Robeson county was named. William Lowrie made a good Whig soldier and fought side by side with the whites in every skirmish and battle in which Col. Robeson was engaged. Whilst piloting Col. Wade and his men across Drowning Creek, after a massacre at Piney Bottom, in Cumberland county, William Lowrie received a severe sword cut in his left hand from a Tory named James McPherson, who resided on the place then owned by Col. Charles Malloy, now Laurel Hill Church, in Richmond county.

The skirmish between Col. Wade's men the service. The feelings and sentiments of James Lowie, their father, were on the Whig side, although he took no active part either way. Living, however, so near to McPhaul's Mill, (a distance of not more than three miles) the then general rendezvous or head-quarters of the Tories from the whole adjacent country, he became obnoxious to them on account of his son William being in the Whig ranks.

Soon after the close of the Revolutionary War, prejudices becoming so rife against him and his son William, on account of Whig principles, James Lowrie sold out on Lowrie Swamp to John Gilchrist in 1791, and moved down on Drowning Creek, near his old friend Silas Atkins and settled on the place now known as â€œthe Harper Ferry place.â€ Here he kept a house of entertainment for the traveling public, in connection with a grocery or drinking saloon. Here he died, leaving land and negroes to his children and a good name to his posterity. Here, in Lowrie's grocery, Col. Vick, then merchandising at Fair Bluff, in Robeson county. (Vicksburg in Mississippi being and the Tories took place on the spot of ground on which Montpelier Church was erected, near Bettie's bridge, now Gilchrist's bridge, in the upper portion of Robeson county, immediately on Drowning Creek, in Robeson county, and William Lowrie carried the marks of this wound to his grave as a token of his devotion to the Whig cause. After the close of the Revolutionary War William Lowrie received a pension for this same sword cut from the government up to the day of his death, as the records in the Pension Office at Washington City will show.

The other two sons of James Lowrie, viz: Thomas and James were of tender age and too young to enter named after him) christened (to use a scotch phrase) all that region lying East of Drowing Creek and extending one or two Miles East of Bear Swamp with the euphonious soubriquet of Scuffletown, from the fact of the half breeds inhabiting that region congregating in Lowrie's grocery and after imbibing pretty freely of whiskey, in engaging in the broad shuffle, and also from the fact that it was generally a scuffle with these people to liveâ€”â€œto keep the soul and body together,â€ owing to their improvident habits. After the death of James Lowrie, his son William Lowrie married Bettie Locklaer, a half-breed Tuscarora Indian woman (Locklaer meaning â€œhold fastâ€).
Thomas Lowrie, his second son, married Nancy Deas, a white woman. James Lowrie, his third son, never married. Allen Lowrie, a son of William Lowrie, married Pollie Cumba, a woman of Portuguese extraction. He raised a large family of sons and daughters; and four of his sons, viz: William Lowrie, Steve Lowrie, Thomas Lowrie, Henry Berry Lowrie, were concerned in the depredations committed in the county of Robeson, from their inception, while it is due to history to record that his other sons had no connection whatever with their four brothers engaged in robbing. Henry Berry Lowrie, one of the younger brothers, assumed the command of the Robber Band and was styled Chief. Two other members of the Robber Band, viz; Calvin and Henderson Oxendine, lineally descended from the Lowrie family, on the mother's side. Boss and Andrew Strong, two other members of the band, and Lowrie blood coursing their veins, their mother being of the Lowrie stock; their father, John Strong was a white man, who come into Robeson county and settled in Scuffletown. An accident connected with the history of John Strong was related to the writer several years ago. At the Fall Term of the Superior Court of Robeson in 1843, John B. Kelly, Esq., of Moore county, then a practicing Lawyer at the Lumberton Bar, meet up with John Strong, whom he knew personally, and addressed him as Gorman. Strong replied and said his name was Strong. John B. Kelly replied and told him to be off, for he wns a villian. Having killed a man in Alamance county, he fled to Robeson to save his neck and assumed the name of Strong, but his real name was Gorman. Two other members of the Robber Band, viz: William Chavis and George Applewhite, (formerly a slave,) were connected with the Lowrie family by marriage. The only members of the Robber gang that were not connected with the Lowrie family by affinity or consanguinity, were Zach T. McLauchlin, a low-bred youth of Scottish descent, Shoemaker John, a negro and William Chavis, a bright half-breed Indian. These--Henry Berry Lowrie, Chief; Stephen Lowrie, Wiliiam Lowrie, Thomas Lowrie, Calvin Oxendine, Henderson Oedine, Boss Strong, Andrew Strong, William Chavis, George Applewhite, being all kinfolk, together with Zach T. McLauchlin, Shoemaker John, and William Chavis, were concerned all of them, in robberies, murders, and depredations committed in the county of Robeson, from the latter part of the year, A. D., 1864, to February 24th, A. D. 1874. 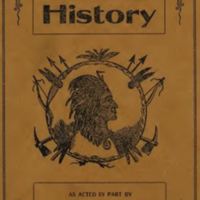