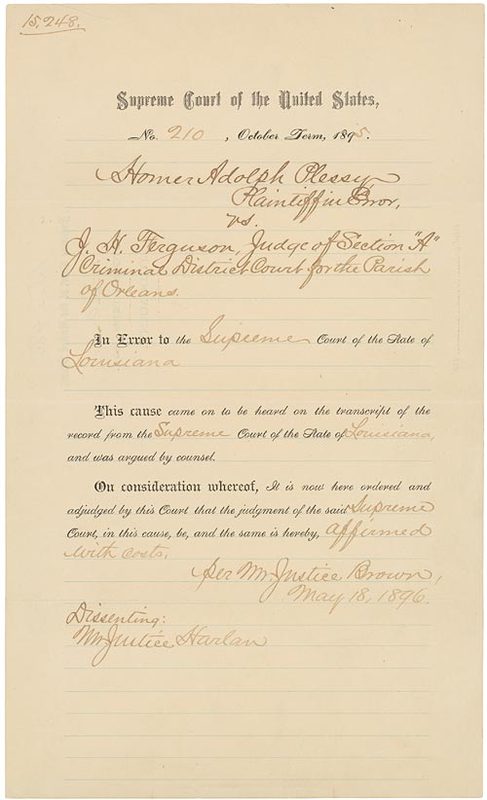 A legal opinion is a document written by a judge following a civil or criminal case in which the court issues its final ruling. It typically includes background on the law in question, issues with the law that were brought to the fore in court, and the final determination of the judge in the form of a written justification.  For cases in which multiple judges ruled, the opinion may also include a dissenting opinion, or an explanation for why a minority of the judges did agree with the majority decision. A concurring opinion may also be present.  This is a ruling in favor of the majority decision, but one which presents different justifications for such ruling.  In justifying their reasons for ruling a certain way, majority opinions interpret the law and can set precedent for new laws. Because of the interpretive nature of court opinions, cases like Plessy v. Ferguson are important for historical analysis.  Understanding how to read a legal opinion, however, is the first step.  Follow along as we go through how to read a court opinion, using Plessy v. Ferguson as our model. Although there are many ways to access the full text of the Plessy decision, I prefer using LexisNexis Academic.  You can locate the decision at: http://www.lexisnexis.com.prox.lib.ncsu.edu/hottopics/lnacademic/?shr=t&sfi=AC00NBEasySrch

A legal opinion will begin the caption. The caption for Plessy's Supreme Court Case is Plessy v. Ferguson.  "Plessy" and "Ferguson" refer to the last names of the parties, or litigants.  In a criminal case, "United States" will indicate that the federal government is invovled with the suit, and "State," "Commonwealth," or "the People," will usually indicate a particular state's involvment.  Typically, the first name refers to the plaintiff, or the person suing, and the second name refers to the defendant, although this is not always the case.  In Plessy's case, Homer Plessy was the plaintiff.  He sued the honorable John H. Ferguson, a judge of the Criminal District Court of Orleans; thus, his name appears first in the caption.

Under the caption is the case citation, which contains a series of letters and numbers.  The citation tells you the name of the court that decided the case, the law book in which the opinion was published, and the year in which the court decided the case. For Plessy v. Ferguson, 163 U.S. 537 refers to a U.S. Supreme Court case that appears in Volume 485 of the United States Reports starting at page 759. 1896 refers to the date which the court decided on the case.

The case summary reviews the legal proceeding which led to the case being brought before the court.  Rarely does the United States Supreme Court hear cases which have not already gone through lower federal and state courts.  For Plessy, the summary traces Homer Plessy's arrest, during which the state of Louisiana charged Plessy with violating a ruling made by the General Assembly on July 10, 1890, his plea before the State Supreme Court, and his petition to the United States Supreme Court for a writ of error, which would reverse the decision of the State Supreme Court by nullifying it.

The decision outlines the basic legal ruling of the court. In Plessy v. Ferguson the Supreme Court affirmed the constitutionality of the Louisiana General Assembly's law requiring separate railway carriages for white and non-white passengers, nullifying Plessy's argument that such a law is unconstitutional based on the equal protection clause of the Fourteenth Amendment.

The majority, concurring, and/or dissenting opinions then follow.  The majority opinion is first.  The authors of the opinions will be listed above the text of the opinion itself.  Sometimes, however, the opinion will be written by "per curiam" in stead of a specific judge, which means "by the court."  In this case, agreement generally exists among all judges involved in the decision.  For Plessy v. Ferguson, Justice Henry B. Brown wrote the majority opinion for the case, which up held the constitutionality of the Louisiana state law requiring separate railway carriages for white and non-white passengers.  The court justified its ruling arguing that separate carriages did not necessarily violate the equal protection clause of the Fourteenth Amendment as long as the accomodations were made equal.  Similar federal and state court cases were considered and used as precedents to validate the court's ruling.  Associate Justice John Marshall Harlan wrote a dissenting opinion for the case, arguing that the separation of citizens based on race could never be legally justified by the U.S. Constitution, which is "colorblind."

Plessy v. Ferguson affirmed the idea of "separate but equal" in the United States.  This precedent provided state legislatures and laywers with a legal backing for systematic segregation.

How to Use Legal Documents as Primary Sources