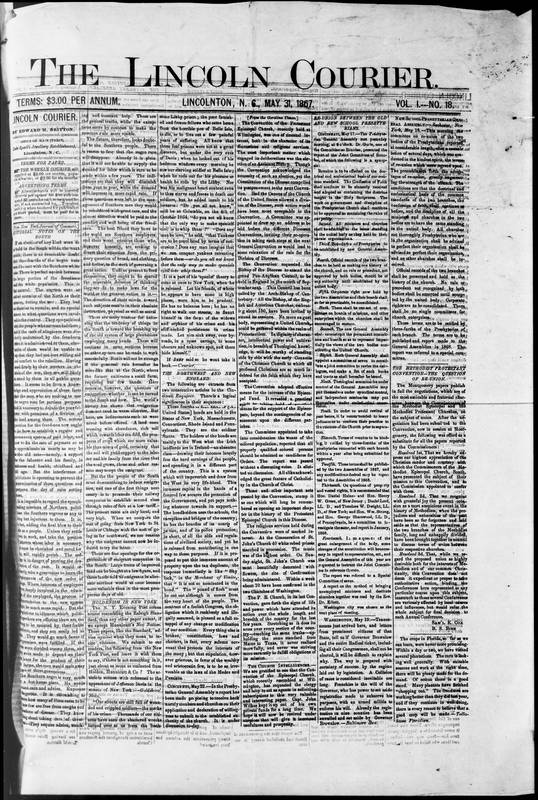 By 1867, neither blacks nor whites were completely confident in the presumed goals behind Reconstruction, but their constant exposure to the economic and political instability of North Carolina raised important questions about the extent of African American rights.  The Weekly Standard commended southern blacks for their restless support of the Union, by stating that “they attach themselves to Union men, and adhere to the Union cause, just as the animals of the desert seek for and find water, or as the child runs to its mother.” (Item #2819).  The comparison of black citizens to “animals” and “children” resembled similar perceptions of African Americans that North Carolinian democrats shared via their periodicals, which both ultimately preserved white superiority over the freed blacks.

Still, it is hard to infer that loyal Unionists truly valued the support of African Americans.  In one sense, African Americans could be relied on to represent a significant portion of Republican votes, given that they had the right to do so in their respective region.  However, as The Lincoln Courier shared via The New York Journal of Commerce, “If an election of any kind were to be held in the South within the next month, there is no reasonable doubt that three-fourths of the negro vote would be cast with the Southern white vote,” (Item #911).  Though this statement seems rather flawed, the article offered credible reasoning which encouraged blacks to exercise both their voting and monetary freedoms within the American South.   Unfortunately, resistant state politicians who persistently pushed for North Carolina’s readmission to the Union worked to prevent racial assimilation into white society unless blacks agreed to work as laborers where white racists could control their wages and subdue their interests in state governance. It is not surprising that the most personable, sentimental newspaper article found through all of the research is an excerpt from a northern periodical, but rather that The Lincoln Courier would post such an enlightening topic available to both literate whites and blacks.

Nonetheless, the Reconstruction era endured a period where African Americans enjoyed more civil liberties than ex-rebels.   North Carolina’s Governor Jonathan Worth—predecessor of William Woods Holden—noted that “all male citizens, white and colored, who have resided in the State one year previous to the day of the election, will be entitled to vote.” (Item #2820)  Congress intentionally enacted a stipulation barring any person who “at any time before the war, had held any office under the United States, or any State office” responsible for the maintenance of justice and who “afterwards engaged in insurrection and rebellion against the United States, or gave aid and comfort to the enemies thereof.’” (Item #2820)  Worth’s statements published in The Tri-Weekly Standard suggested the belief that most colored people—so long as they had inhabited the state for a full year and were of legal voting age—would be recognized by these provisions.  Most importantly, Worth attested the federal government’s influence in state affairs, which made “the negro in the excluded State, as to civil and political rights, the equal of the most favored class or the whites, and the political superior of most of those who held office in the State before the war.” (Item #2820)  Without having much opportunity to prove themselves in politics, North Carolina blacks inherited considerable recognition in state and federal affairs, though this outraged many whites still resisting the break in southern cultural tradition.  More specifically, the federal government’s judgments were perceived by North Carolinians as immoral since the political inclusion of African Americans was believed to be a ploy for the opposing Republican Party.  The federal legislation of Reconstruction had made clear the seriousness of the South’s betrayal of the Union, which in turn only further established the racial tension in the American South.

In the Face of Reconstruction, North Carolina Newspapers Shaped Public Opinion through Political and Cultural Misconceptions