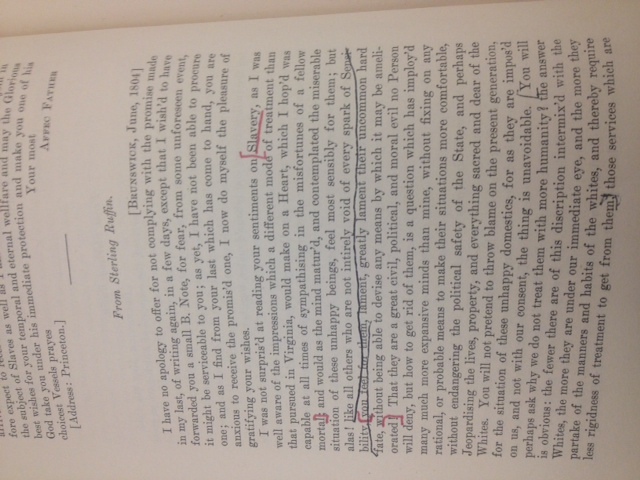 In 1804, during Thomas Ruffin’s college years at the College of Nassau Hall (Princeton University) a personal correspondence between Thomas and his father Sterling reveal honest quandaries with the institution of slavery. (Item 75) Sterling Ruffin, noted by contemporaries, was “Ardent in his religious sentiments, and long attached to the Methodist Episcopal Church…”; furthermore, “It is believed that his father, who was a deeply pious man, was controlled in the selection of this college…not only by a desire to guard his son’s health, which had suffered from the malaria of tide-water Virginia, but to secure him as well against the temptations incident to college life in an institution where, as he supposed, the discipline was too lax for the sons of affluence who matriculated there. ( Peele 1898, 284, 286-287)  Nevertheless, in a June, 1804 letter from Sterling in response to Thomas, an early glimpse of Thomas’s emotion towards the institution of slavery is revealed. Responding to Thomas, Sterling writes,

“I was not [sic] surpris’d at reading your sentiments on Slavery, as I was well aware of the impressions which a different mode of treatment than that pursued in Virginia, would make on a Heart…but alas! like all others who are not intirely void of every spark of Sensibility, you feel for them, lament, greatly their uncommon hard fate, without being able to devise any means by which it may be ameliorated!” Sterling continues by charging Thomas, “You will not pretend to throw blame on the present generation, for the situation of these unhappy domestics, for as they are impos’d on us, and not with our consent, the thing is unavoidable… It has been one of many benefits which has resulted to Society form the Christian Religion to expose the impropriety of keeping our Brothers in bondage, and however we may at present justify ourselves from the peculiar situation of our Country consider'd politically; I cannot but look forward with pleasure to the time, when an Alwise, and Merciful Creator will by a more universal revival of his blessed Religion prepare the Hearts of all men to consider each other as Brothers, and put us more equallity even in temporal things…” (Item 75) Having been born the son of planter and living among other plantations in Essex, Virginia, Thomas undoubtedly understood the dynamics of the master-slave relationship before ever joining the North Carolina Supreme Court in 1829 and subsequent ruling regarding slavery in State v. Mann. Given the fact of his personal involvement and ownership of slaves, one could argue that Ruffin came to accept a central tenet of maintain an antebellum, wealthy plantation lifestyle: ownership of human property for the intended purpose of extracting services and labor.

By the outbreak of the Civil War, Thomas Ruffin established himself as a wealthy plantation owner and judge in North Carolina. His slave trading partnership with Benjamin Chambers in the 1820’s and ownership of more than one hundred slaves on both his Alamance and Rockingham County plantations provide testament of a dedicated North Carolina planter slave owner . (Morris 2000) Furthermore, Ruffin’s successful involvement as president of the State Bank of North Carolina, in which the State Bank resources and interests in slave property and his leadership position as president of the North Carolina Agricultural Society before the Civil War underscored his commitment to improving agriculture and the relationship of land and slave labor. (Hamilton 1918, 5)

While The Paper of Thomas Ruffin (1918) contain very few letters of correspondence pertaining to Ruffin’s treatment of his slaves, three letters in particular seem to elude a master who faithfully cared for and considered his slaves a second form of family. The first two letters are correspondence between an associate in Washington D.C, James T Morehead, and  Mr. Joseph Polluck, Post Master at Greenup C.H., Kentucky. The letters surround two of Ruffin’s slaves, Buck and Armstead, both of whom ran away to Ohio but where captured and arrested in Kentucky after a “misunderstanding” with one of his overseers. According to Ruffin, eight slaves ran away due to harsh treatments from his overseers, yet upon Ruffin’s return to the plantation, all but Buck and Armstead returned immediately.  Each letter dated 1852, Ruffin attempts to describe his two slaves in order to have them identified and returned. In describing Buck, Ruffin writes, “a sturdy, well-set, active, strong man; with but a small beard, and a clear, though soft, voice; a black colour, and, unless he has seen many hardships since he left, he has full face, and a smooth skin…and he is a  very sensible man, a good wagoner and capital ploughman [emphasis mine].” (Hamilton 1918, 329) After a physical description similar to Buck’s, Ruffin describes Armstead as having, “no mechanical trade, but was bred on the farm; his work in the summer being at the hoe, at which he was excellent…” (Hamilton 1918, 331) However, what is interesting about Ruffin’s description is that in each letter, Ruffin prefaces each slave by saying “I am not in the habit of examining the person of my slaves minutely, and do not remember any particular mark on his body.” A third letter involves Ruffin’s intention to find a market for flour, 50 hams, and 50 shoulders of bacon. Yet, in no urgency Ruffin writes, “We do not, however, care much about it at the present, since our white and black family can consume the present stock… [emphasis mine].” (Hamilton 1918, 306) Upon reflection of Ruffin’s description of his slaves, one modern scholar comments, “Not all slaveholders were willing to accord their property such a measure of dignity.” Furthermore, “Ruffin’s papers reveal not ill-treatment of slaves…” (Yanuck 1955, 474-475) 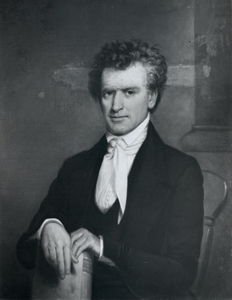