In this July issue of The Old North State, a certain type of anger can be seen in the writing. Men were beginning to speak out on the unfairness of the acts being presented. To the men who considered themselves to be role models of the Southern cause, the acts of Congress left their voice out of any legislation. They asked how lawmakers “will aid in the elevation of those who were on the southern side, will help to consecrate Confederate sentiments and sympathies, and make the confederate cause supreme in the South?” It was realized throughout the South, during the early stages of Reconstruction that the Northern Republicans were not likely to take pity and negotiate terms with Southern leaders. At this point in the progression of the acts, the South was left to determine if they would let the acts continue to gain momentum or try to speak out on behalf of the southern people. The transcribed excerpt shows the first passage on the thoughts of the Southern people. For the full text, see the PDF file.

Are those reasoning or reasonable men who expect, after a war of four yearsâ€™ duration which entailed a debt of three thousand millions of dollars, which inflicted up on the union armies the loss of perhaps five hundred thousand lives and shook the union to its very centre, that the section that ultimately prevailed, and with so great difficulty, will aid in the elevation of those who were on the southern side, will help to consecrate Confederate sentiments and sympathies, and make the confederate cause supreme in the South? If there are any who look for this result they will look in vain it is not in human nature to he so magnanimous as to give up to a conquered adversary the fruits of victory. Individual men would not do this, much less would politicians, whose rule of action is to take and keep every advantage. It has always been our error that we calculated too much on Northern magnanimity - may we not say Northern stupidity? We committed another error. Accustomed to dictate, we encouraged ourselves in the delusion that we could at least negotiate; not realizing the fact, patent to the entire world beside that defeat had extinguished all of our powers, if not rights. The conqueror was the master, and was in position to impose any terms that he might choose to prescribe. 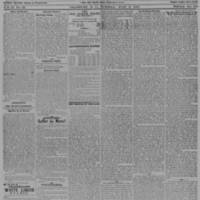