Letter from Zebulon B. Vance to Edward Stanly, November 24, 1862

Letter from Zebulon B. Vance to Edward Stanly, November 24, 1862

This was the last in a series of fiery correspondences between the Confederate North Carolina Governor, Zebulon Baird Vance, and the Union North Carolina Governor, Edward Stanly. A series that began with the request for peace talks quickly became a heated duel over each man's honor. In this epistle in particular, Vance's quest was to draw out the fact that although Stanly was a North Carolina native, he had been in California since 1853, which, Vance claimed, disconnected him from the North Carolina people as they marched into secession.

In the beginning of this letter, Vance accused Stanly of being a traitor to his home state by accepting the position of Governor for the Union. Following this accusation, Vance listed a number of atrocities that the Union soldiers had inflicted upon North Carolina's civilians, including vandalization, murder, and even the rape of two women in New Bern, the town in which Stanly resided.

Vance then contrasted the characteristics that he attributed to Stanly against his self-image. Vance declared himself to be a proud "Chief Magistrate," who "glories" in the fact that he represents such a strong and independent people as the North Carolinians. Finally, Vance closed with a rather poetic description of the ways in which Stanly betrayed a land and a people who once befriended him.

To E. Stanly
Raleigh, Nov. 24th 1862
Having recieved and read your letter of the 7th inst, a proper sense of self-respect and of regard to the position I occupy compels me to return it herewith to its author.
I have only to say Sir, by way of conclusion to this correspondence, which I thought had ended with my reply to your first, that you should by this time have been convinced that your mission to North Carolina was a failure, miserable and complete.
Coming to the people who had often honored you, in the wake of destroying armies; assuming to be governor of the State by the Suffrage of abolition bayonetts red with the blood of your kindred and friends, how could you expect it to be otherwise?
Do you not Know sir, that your name is execrated, and only pronounced with curses in North Carolina. Could any sane citizen believe in the "blessings" which you propose to bestow upon the people whom you betrayed and seek to subjugate, or trust your professions of a desire to mitigate hte evils of war, in the presence of the damnable arocities every day committed almost under your very eye, upon a defenceless and unarmed people?
Are you aware Sir, of the shooting of a private citizen, of the burning of the villages of Hamilton and Williamston, turning naked women and children out upon the bare earth, and of the vandal destruction of property on the Roanoke by Gen. Foster's command recently? Do you know the fact that two helpless females were recently, almost in gun-shot of the town of New Bern, seized by a brutal Soldiery
"With liberty of the bloody hand
and conscience wide as hell"
and forced to submit to the last and crowning outrage which can be inflicted on the Sex?
Are you informed Sir, lastly, that even the sleeping dust of the dead of the great and good dead of North Carolina has been robbed of its covering in sight of that man who speaks of himself as a "son of North Carolina", "Solicitous for her honor", who comes to "Confer blessings" and who "thanks heaven that he is the representative of a government" &c?.
When you use your influence to suppress these outrages of your associates, nay when you avow yourself ashamed of them, then and not till then, will your professions be entitled to slightest credence.
No Sir, the people of North Carolina know all these things, and have learned well the character of their foes, and the nature of the "blessings" in store for them. Her "Chief Magistrate" too appreciates his position, and glories in the fact that he represents a people who are prepared for the worst and have sincerely resolved to endure all, even as their fathers did, which a merciless foe can inflict, for the sacred cause of liberty and independence.
Dismiss therefore your hopes of the subjugation of North Carolina through the weakness and baseness of her people. She may be subjugated, you may reach her Capitol and take possession of her government, the fortunes of War are fickle. But I assure you upon the honor of a Son, who will follow as he has followed and maintained her, whether right or wrong, who has every means of Knowing the sentiments of her people, that you can only do so over the dead bodies of the men who once respected you, through the smoking ashes of the homes which once greeted you with hospitable welcome, and through fields desolated, which once gladdened your eye, rich with the glorious harvest of peace. 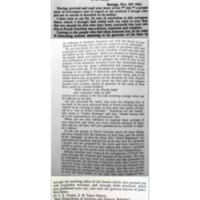