"Proclamation of Amnesty and Reconstruction," May 29, 1865

"Proclamation of Amnesty and Reconstruction," May 29, 1865

President Andrew Johnson issued an amnesty proclamation to "induce all persons to return to their loyalty" to the United States of America. This was the third of such proclamations, but the first to offer amnesty at the conclusion of the war. Johnson offered an oath to all participants in the "rebellion." After swearing this oath all rights of property would be restored on the individual except that of owning slaves. Exempted from the benefits of the oath were fourteen "classes" of individuals who engaged in the war against the Union from civil or diplomatic officers of the Confederacy to individuals who conducted piracy against Union commerce during the war. However, individuals in the "excepted classes" were allowed to apply for pardon from the President.

Whereas the President of the United States, on the 8th day of December, A.D. eighteen hundred and sixty-three, and on the 26 day of March, A.D. eighteen hundred and sixty-four, did, with the object to suppress the existing rebellion, to induce all persons to return to their loyalty, and to restore the authority of the United States, issue proclamations offering amnesty and pardon to certain persons who had directly or by implication participated in the said rebellion; and whereas many persons who had so engaged in said rebellion have, since the issuance of said proclamations, failed or neglected to take the benefits offered thereby; and whereas many persons who have been justly deprived of all claim to amnesty and pardon thereunder, by reason of their participation directly or by implication in said rebellion, and continued hostility to the government of the United States since the date of said proclamation, now desire to apply for and obtain amnesty and pardon:

To the end, therefore, that the authority of the government of the United States may be restored, and that peace, order, and freedom may be established, I, ANDREW JOHNSON, President of the United States, do proclaim and declare that I hereby grant to all persons who have, directly or indirectly, participated in the existing rebellion, except as hereinafter excepted, amnesty and pardon, with restoration of all rights of property, except as to slaves, and except in cases where legal proceedings, under the laws of the United States providing for the confiscation of property of persons engaged in rebellion, have been instituted; but upon the condition, nevertheless, that every such person shall take and subscribe the following oath, (or affirmation,) and thenceforward keep and maintain said oath inviolate; and which oath shall be registered for permanent preservation, and shall be of the tenor and effect following, to wit:

I, _______ _______, do solemnly swear, (or affirm,) in presence of Almighty God, that I will henceforth faithfully support, protect, and defend the Constitution of the United States, and the union of the States thereunder; and that I will, in like manner, abide by, and faithfully support all laws and proclamations which have been made during the existing rebellion with reference to the emancipation of slaves. So help me God.

Provided, That special application may be made to the President for pardon by any person belonging to the excepted classes; and such clemency will be liberally extended as may be consistent with the facts of the case and the peace and dignity of the United States.

The Secretary of State will establish rules and regulations for administering and recording the said amnesty oath, so as to insure its benefit to the people, and guard the government against fraud.

In testimony whereof, I have hereunto set my hand, and caused the seal of the United States to be affixed.

Done at the City of Washington, the twenty-ninth day of May, in the year of our Lord one thousand eight hundred and sixty-five, and of the Independence of the United States the eighty-ninth. 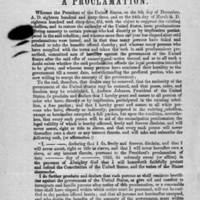