G.S. Bradley, a reverend for the 22nd Wisconsin Regiment, recorded his accounts in a diary that he published soon after the Civil War. The writing provided an interesting account of the Union soldiers in his group in the town of Madison, Georgia, on their way to Savannah in November, 1864. The entry told of how soldiers proudly burned the local railroad buildings and a building that was used as a slave whipping post.  The account also told the opinion of a Georgian woman.  The woman said, while the Union may have physically whipped the Confederacy, it was not “subdued in spirit.”  The entry provided an interesting account of a Union perspective and a Confederate perspective.  The Confederate account was particularly strong, as it signaled that material possessions could be taken away, but the Confederate spirit to fight still rang true. The Union perspective demonstrated the Union's willingness to destroy physical property for the Union's cause.  The main photo is of Madison Presbyterian Church that was saved from destruction by Sherman and his army, in Madison, Georgia.

G.S. Bradley, The Star Corps; or Notes of an Army Chaplain during Sherman's Famous "March to the Sea," (Milwaukee, Wisconsin: Jermain and Brightman, Book and Job Printers, 1865), 185-186.

Broke camp about daylight, and after marching a short distance, were ordered to halt and tear up and burn the railroad track. The entire forenoon was spent in this manner, the track being torn up as far as Madison. It was quite interesting to see them tear it up. A whole regiment would get hold of a long strip and turn it completely over. Fence rails were piled up on and fired applied. At times the track had the appearance of a huge furrow going over. All the railroad building in Madison were burned, the Market House, said to have been used lately for a slave whipping post. Our soldiers were quite loud in their denunciation of the vile system, and the torch was applied with a hearty good will.

Madison is one of the prettiest places I have seen in the South. It is in the midst of one of the richest sections of Georgia, and most of its inhabitants belong to the upper class. Many who reside here own extensive plantations in Mississippi or Alabama. As I passed a house, a lady, sitting on a piazza, inquired:

“When do you think this will be over?”

“Well,” said she, “I think our people are very foolish to continue the war any longer. We are not subdued in spirit, but we are whipped, and we might as well own up. We hate you, but you now have the power in your own hands, and sooner or later we must come under.” 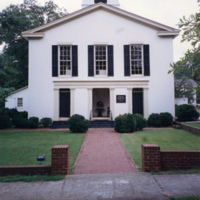 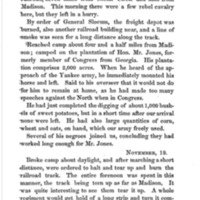 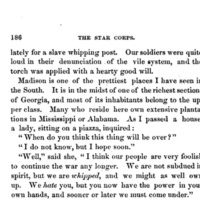