William T. Sherman, a major-general for the United States Army during the Civil War, wrote the letter to General Henry Halleck, who was in Washington D.C. at the time. General Halleck served as Chief of Staff, and regulated the administration of the United States Army. Sherman wrote the letter just outside of Atlanta in early September of 1864. The letter to General Halleck described the plans that General Sherman hoped to accomplish and the men that he needed for his situation. The importance of the letter, though, largely came at the end, in which Sherman discussed the reason for his â€œbarbarityâ€: hoping it would lead to peace and an end to the â€œbarbarityâ€ of the war. Many people in the South, though, objected to the view espoused by Sherman. The main photo is a drawing of Shermanâ€™s men marching through Georgia.

The 20th Corps now occupies Atlanta & the Chattahoochee bridges. The main Army is now here, grouped below Jonesboro. The Enemy hold a Line facing us with front well covered by parapets, & flanks by Walnut Creek on the Right & a Confluent of Flint River on his Left. His position is too strong to attack in front & to turn it would carry me too far from our base at this time. Besides there is no commensurate object, as there is no valueable (sic) point to is Rear till we reach Macon 103 miles from Atlanta

We are not prepared for that & I will gradually fall back & occupy Atlanta which was & is our grand objective point already secure.

For the future I propose that of the drafted men I receive my due share, say 50,000. That an equal or greater number go to Genl. Canby who should now proceed with all energy to Montgomery & the Reach of the Alabama River above Selma-that when I know he can move on Columbus Georgia, I move form junction repair Roads to Montgomery & open up the Apalachicola & Macon. This Campaign can be made in the winter, & we can safely rely on the Corn of the Flint and Chattahoochee to supply forage.

If the Tensas Channel of the Alabama River can be used, Genl. Gardner with his Rebel Garrison could continue to hold Mobile for our use when we want it.

I propose to remove all the Inhabitants of Atlanta, sending those committed to our cause to the Rear & the Rebel families to the front. I will allow no trade, manufactories or any citizens there at all, so that we will have the entire use of Railroad back as also such corn & forage as my be reached by our troops.

If the people raise a howl against my barbarity & cruelty, I will answer that War is War & not popularity seeking. If they want peace, they & their relations must stop War. 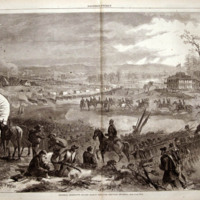 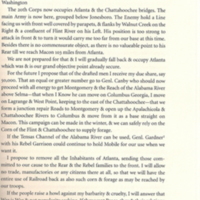