While foraging had always been a common practice by Sherman’s troops as they marched through the South, their techniques in South Carolina constantly stretched justifiable foraging standards. Captain George Pepper, of the Union Army, told of these actions in his memoir that he published in 1866, the year after the Civil War ended. In this section, he referred to his time in South Carolina during the march in February of 1865.  The techniques described by Captain Pepper showed that the foragers were willing to nearly kill a man to gain his valuables. Other times, if the forager could not handle all of the items he would destroy them so no one could use them. The escalated foraging practices demonstrated once again how Union soldiers were willing to make sure South Carolina paid for its actions, as they ravaged the state in February of 1865.  The main image is of bummers in the state of South Carolina.

But there is another class of devastations widely different from these, which have been perpetrated to an extent of which the North has little conception. These may be classified, as first, “deliberate and systematic robbery for the sake of gain.” Thousands of soldiers have gathered by violence hundreds of dollars each, some of them thousands, by sheer robbery. When they come to a house where an old man may be found whom the most rigid conscription had not taken, they assume that he has gold and silver hidden and demand it. If he gives up the treasure cheerfully, he escapes personal violence. If he denies the possession of treasure and they believe him, he escapes. If they do not believe him they resort to violent means to compel its surrender. With a rope they will hang him until he is nearly gone. Then let him down and demand the money-and this is repeated until he or they give up. Again, they will compel a man to “double-quick” for one, two or three miles, until he sinks from exhaustion, and then threaten him with death unless he reveals the hiding place of his riches. Again, they prepare the torch and threaten to burn his house and all it contains, unless the money is forthcoming.

This robbery extends to other valuables in addition to money. Plate and silver spoons, silk dresses, elegant articles of the toilet, pistols, indeed whatever the soldier can take away and hopes to sell; these are gathered up and carried off to the extent sometimes of loading a wagon at one mansion. “What is done with these?” How many of them finally reach the North “by hook or crook,” I will not affirm; some through the soldier’s mail, some wrapped up in the baggage of furloughed officers, some passed through the hands of the regular official, having the permit of the government.

A second form of devastation practiced by some of our soldiers, consisted in the “wanton destruction of property which they could not use or carry away.” Of this I have the evidence of sight, in some cases of undoubted testimony in others. 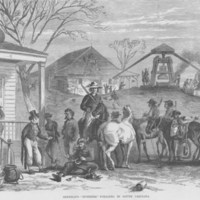 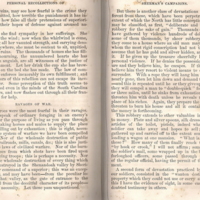