Laurel Hill
Richmond Co., N.C.
March 8, 1865
There is little of interest today, we have moved fifteen miles through a fine country, well cultivated, and affording plenty of forage. It has rained all day, the roads would have been good but for the rain; they became very bade before night.

We crossed the South Carolina and North Carolina line at 8 o’clock this A.M. and we felt relieved in getting out of the most contemptible state in the Union, as regards the face of the country and in fact everything in it.  There is nothing in it or its people to place it on an equality with the meanest state of the Union, much less to place it in the van in all great movements, political and military. It has but one element of which it can boast, and that is Treason.

We have travelled about 350 miles in the state and have seen all the characteristic portions of it, and I insist that it is the meanest patch of country in America. The people are a cringing sycophantic race, who have always been led and gulled by a dozen ambitious blockheads. 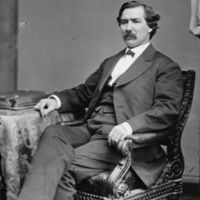 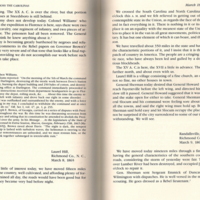