Mrs. “H.J.B.” was a middle aged woman from the state of Georgia who moved north to stay with her sister-in-law in Orangeburg, South Carolina, in hopes of avoiding Sherman’s army. Eventually, though, Sherman came to Orangeburg, South Carolina, where Mrs. “H.J.B.” stayed.  Mrs. “H.J.B.’s” brother, who owned the home where she stayed, was a surgeon for the Confederate Army. Mrs. “H.J.B.” went to get a guard to protect her sister-in-law’s house after General Sherman’s troops, of the Union Army, arrived. When asked if she was the wife of a Confederate soldier, by Sherman himself, she said yes, and that she felt “glory in the thought.” In another question, she also praised Confederate General Joseph Johnston. Although a refugee, and on the run from the destruction of Sherman’s army, Mrs. “H.J.B.” did not back down once in her discussion with Sherman.  Mrs. “H.J.B” spoke with pride and loyalty when she discussed her Confederate connections.  Even if on the run, Mrs. “H.J.B.” did not let Sherman’s destruction destroy her Confederate loyalties.  The main image is of a city ruined in South Carolina.

As I made my way to the fireplace my attention was attracted to one of the officers who sat in the corner with a map open on his knee. From the pictures I had from time to time seen of him I knew at once that this was General Sherman.

I determined to feign ignorance so long as I could. The map proved to be a complete diagram of all the farms, roads and rivers in Orangeburg County. As I advanced towards him he raised his head abruptly:

“Whose farm is this, madam?”

Another officer, whom I afterwards learned was General Howard, standing near, questioned me at this point:

“I want nothing but the truth, remember,” said Sherman again as abruptly and as offensively as before.

“Unlike yourself,” I answered hotly, “I am incapable of anything else, sir.”

A slight flush of annoyance gathered upon his face for a moment, but in the same brusque, methodical manner he went on with the questioning:

“He is a surgeon, sir, in the Confederate service.”

“In what command is he at present?”

“He is a member of a regiment that owns that glorious old hero, Joseph E. Johnston, as their commander-in-chief.”

“There is no need for such answers as these, le me assure you madame,” he said, for the moment losing control of himself. “Pray remember monosyllables are preferable, where there is no necessity for elaborate words.”

I bowed half mockingly.

“Are you a rebel soldier’s wife, madame?” he questioned again.

“I am the wife of a Confederate soldier, and glory in the thought” -the last words being rolled out with volume and an intensity that surprised even myself.

At this moment the book was shut up in a vicious snap, and the back of the hero of the “March to the Sea” was politely turned up me . . . . Sherman said sharply:

“I don’t think your presence is further needed here, madame. You may retire,” and putting on his hat he himself walked towards the door.

“Thank you, kindly, for the permission,” I said, with broad sarcasm, as he passed me.

A moment later the door closed upon his retreating form, and that was the first and the last time my eyes ever rested upon Gen. William Tecumseh Sherman. 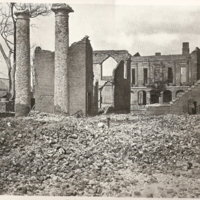 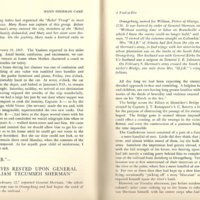 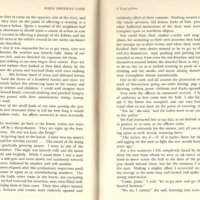 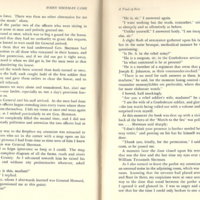 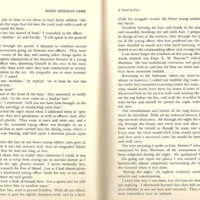 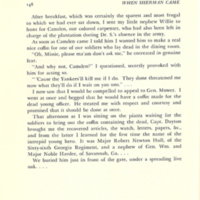 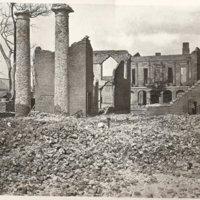