We present on page 249 several sketches and portraits illustrating the career of the band of outlaws in Robeson County, North Carolina, whose crimes, escapes, and encounters have filled the measure of wonder and repulsion for several years.

These bandits are at present six in number, although they were formerly associated with several lesser desperadoes, whose courage and resources were not up to the notorious standard of the chiefs. One of these inferior robbers, Oxendine, has been hanged; another, Dile, has preferred the ennui of a prison to the precarious life of the swamps and pursuit, and is ready to turn State’s evidence against the others; two more, Calvin Oxendine and “Pop” Oxendine, remain voluntarily in jail; and one other, “Shoe-maker John,” went to the penitentiary gladly to anticipate higher charges.

The band as it stands, recognized as pests by the Legislature and Governor of the State, and by county authorities, by the almost unexampled reward of $45,000, “dead or alive,” consists of the following characters:

Henry Berry Lowery, the chief—a light mulatto, dubiously said to be intermixed with Tuscarora Indian blood, the white ingredient being pure Scotch of Highland stock. He is of a family immemorially free in North Carolina, and his grandfather moved at the beginning of this century from the county of Halifax, near the Virginia line, to a border county near the South Carolina line, and settled there among the swamps and pitch-pine slashes of the Lumber River, a branch of the Little Pedee. The surrounding whites were almost to a man Scotch slave-holders. The region around the Lowerys for several miles was peopled by free negroes, who numbered nearly 1500 before the rebellion, and were almost uniformly of light skins, and with traces of some novel intermixture which gave them the look of gypsies. It has been suggested that Spanish, Portuguese, or “Romany” blood flows in the veins of these mulattoes of Scuffletown, such being the significant title of their settlement.

The Lowerys and their kin were superior in handicraft, personal bearing, and beauty to their yellow neighbors, and were formerly prosperous slave-holders. In 1835 the free blacks of North Carolina were deprived of the political and judicial rights of whites, and the seeds of animosity were sown among them. The loss of these rights led to depredations on their property, and the ultimate loss of nearly the whole of it. This induced a sense of injury, which was to break out in violence in the next generation. The father of the Lowery outlaws, Allan Lowery, brought up all his boys to the trade of carpentry, and they were generally industrious, apt, and docile until the beginning of the civil war. The whites, who had always disliked this free colored settlement, and imposed upon it, began to impress the Lowerys to work among the slaves on the breastworks of Wilmington. Their proud natures revolted, and Henry Berry Lowery, the youngest brother, ran off to the swamps, and harbored there with several of his connections. This outcast life led to loose habits, and awoke the spirit of retaliation. In 1864 a white man named Barnes, who was a neighbor of the Lowerys, was assassinated by them in the course of a feud, and soon after another, named Harris, for persecuting their family. Federal soldiery, escaped from the prison pen of Florence, were said to have been accessory to these crimes, and when Sherman’s army swept up to this region the Lowerys gave its “bummers” aid and comfort. After the army passed on the white neighbors turned about and slew in cold blood the father and a brother of H. B. Lowery.

The vow of vengeance made by the young man could not have been the immediate incentive to his worse career, for he killed nobody for two or three years, and once gave himself freely up to the Freedmen’s Bureau authorities and went to jail. But the whites would not include him in the terms of the act of oblivion for crimes chargeable to the war; they arrested him at the side of his bride, persecuted his family, and finally woke a demon abler and bloodier than they could subdue. Collecting around him a little band, never greater than ten nor less than five, Lowery turned robber, accepted his outlawry as a proclamation of war, and slew without remorse all who hunted him or had persecuted his kin. The immense number of his robberies and the terror of his prescience and prowess finally put him out of the pale of any one’s sympathy, and the Adjutant-General of the State, with regulars, militia, and volunteers, took the field against him. With the moral support of the people of Scuffletown, he defeated the whole force, added to the terror of his name, and made himself the Rob Roy M’Gregor of his race. This defense was accomplished, however, with the commission of above a dozen shocking murders, two or three of which are ascribed to rapine. The band have invariably respected female virtue, and have committed no acts of arson. They have often spared life where there was a temptation to take it, and have had the provocation of several recent murders committed with less discrimination against their color by the whites. Henry Berry Lowery is about twenty-eight years old, active, vigilant, decisive, and with very considerable military powers and knowledge of character. His elder brothers, Steve Lowery and Tom Lowery, are with him in the swamps of Scuffletown. Steve surpasses him in Indian ferocity, Tom in a lower order of cunning. The brothers of Henry Berry Lowery’s wife, Andrew Strong and “Boss” Strong, are also in the party. They are nearly white. Andrew Strong is the meanest of the gang—a mere robber; and “Boss” Strong is a plastic creature of H. B. Lowery, but for that not less dangerous and terrible. George Applewhite, a negro who intermarried with some connections of the Lowerys, is a ferocious fellow, not of late recognized among them. The interests of society and the welfare of the colored race require that this band of outlaws be extinguished, but the people of the North State have shown no great energy or sagacity to accomplish it. They have been at large the better part of eight years, and all have broken from one or more jails. Moss Neck Station, in our illustrations, is the place where the Lowerys frequently and contumaciously appear when the railway trains pause there on the Wilmington and Charlotte Railway. The bandits carry from three to five revolvers apiece, a knife, and a pair of double-barreled shot-guns. Their leader has a Spencer or Henry breech-loading rifle.

The adventures of these bandits would make a volume of thrilling interest. Their escapes have been at times almost incredible. Last fall a party of twenty-three soldiers were at a spot called Wiregrass Landing, and as they looked up the narrow channel of the Lumber River they saw Henry Berry Lowery paddling a small flat-bottomed scow, his belt of arms unbuckled and thrown in the bottom of the boat. Instantly the whole party opened fire, when Lowery, with the agility of a terrapin, threw himself into the water on the remote side of the scow, tilted it up like a floating parapet, and reaching inside successfully for his weapons, aimed and fired as coolly as if he were at the head of his band on solid ground. In this position he actually wounded two of the men and put the whole posse to flight. Our artist gives a graphic sketch of this exciting scene.

Another scene depicted by our artist is the rescue of the wife of Henry Berry Lowery, who was arrested during his absence by a company of soldiers as the accomplice of her husband in his crimes. Lowery and some of his gang discovering this, started to intercept the party, and making a detour through the swamp, threw themselves behind a pile of lumber near the railway track, and there waited like panthers for the soldiery to appear. They came, jocular and unsuspecting, leading the mulatto woman and her children. Suddenly there were a series of reports of fire-arms, and three persons were down on the track moaning in the anguish of mortal wounds. The woman and children were left standing on the track, and the rest of the escort party ran away, more or less injured with buck-shot. 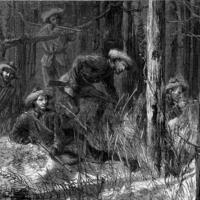 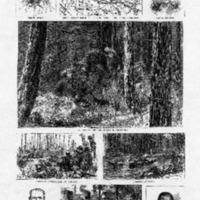