We give on this page one of the scenes lately made familiar in the South—a registration, not an election, scene. The late slaves of the South have exhibited unusual interest in the work of registration, their first necessary step toward se- curing the privilege of suffrage which they estimate so highly Our sketch was made from an actual scene in the little mountain town of Asheville, North Carolina, but it will as well apply to all parts of the South.

The work of registration has been going on for several months past, and has been completed in several of the States; and the result shows that in Louisiana, Alabama, Georgia, and Texas the colored voters are in the majority, and, being united in opinion and policy, can easily control the elections in those States. The white majority in Virginia is not great; in North Carolina it promises to be less; and South Carolina, Florida, Arkansas, and Mississippi will probably be controlled by the colored vote; so that in all probability the colored voters, even without the assistance of the loyal whites, will carry in the approaching State, as well as in future national contests, eight out of the ten unconstructed States. 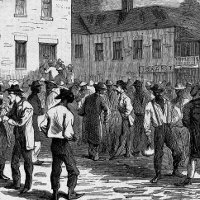