The Trent River, North Carolina, settlement was a freedmenâ€™s village established under the auspices of the Freedmenâ€™s Bureau. In these illustrations, Theodore R. Davis depicted African Americans milling around a school house, a chapel, and "negro huts" and a meeting between Generals John Steedman and Joseph Fullerton and freedpeople. President Andrew Johnson had sent Steedman and Fullerton to North Carolina to investigate abuses by the bureau's assistant superintendent, Edward S. Fitz. The artist explained that the condition of the "simple-minded" freedpeople depended on the quality of the bureau agent. The artist concluded that "the freedmen can be left at present without some protection of the kind I do not believe," but "that a change might be made for the better, both for the freedmen, people, and Government," especially complaining that "large numbers of able-bodied men do no other labor than draw their rations from the Government" and recommending that their removal to an area where their labor was needed.

Our artist, Mr. Davis, gives the following description of illustrations on page 361:

“The Inspection Tour of Generals Steedman and Fullerton has certainly had one good result, the removal from authority of a person named Fitz, who first came among the freedmen as a chaplain to a colored regiment, and won, by different acts of kindness, the confidence of simple-minded people, that are ever ready to believe that a man from the North is sure to be their friend.

“While at Newbern Generals Steedman and Fullerton were called upon by a delegation of `old uncles,’ and from these men we heard the story of their troubles, feeling convinced that they spoke only the truth. The day following the Generals visited the Trent River Settlement, and met the freedmen in their simple log-chapel. Here, from different colored men, we learned the story of their difficulties.

“With regard to the Freedmen’s Bureau in North Carolina, there is no doubt but that the Bureau has accomplished a vast amount of good, and is in some districts of advantage; but, in others, the management of affairs has been so bad as to occasion trouble, not only with the citizens but with the freedmen. At Salisbury all classes join in testifying to the capable and satisfactory manner in which Colonel C. A. Cilley has conducted affairs.

“At Raleigh, Goldsborough, and Newbern the case is different. The freedmen see that the Bureau agents are looking out for their welfare only so far as their pockets are benefited by so doing. If the citizens can be believed—and they seem honestly disposed—they would willingly take the charge of the freedman, and give him his rights in the courts (no laws of the State give him these as yet). The freedmen express a strong desire to have the Bureau left for their protection. ‘It has been their place of refuge in the past—why not in the future?’ They are afraid that the ‘white people will not be kind to them if the Bureau is taken away.’

“That the freedmen can be left at present without some protection of the kind I do not believe; but that a change might be made for the better, both for the freedmen, people, and Government, is certain. At present large numbers of able-bodied men do no other labor than draw their rations from the Government, and will continue the same heavy labor until some way is devised for their removal to some position where their labor can be made available.” 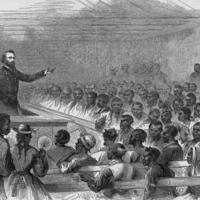 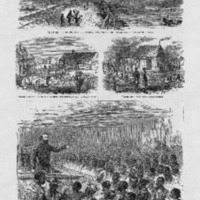